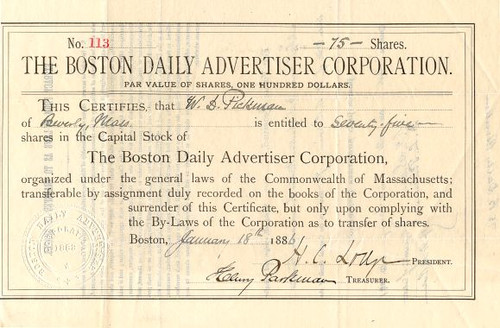 Beautiful certificate from the Boston Daily Advertiser Corporation issued in 1886. This historic document has an ornate border around it. This item has the signatures of the Company's President, Henry Cabot Lodge and Treasurer and is over 128 years old. VF+ Henry Cabot Lodge Born May 12, 1850 Boston, Massachusetts Died November 9, 1924 (aged 74) Cambridge, Massachusetts Lodge was born in Boston, Massachusetts, the great-grandson of Senator George Cabot the son of John Lodge and Anna Cabot. Lodge grew up on Boston's Beacon Hill. In 1872 he graduated from Harvard College. At Harvard he was a member of Delta Kappa Epsilon fraternity and the Porcellian Club. He also was a member of the Hasty Pudding Club and took part in an early show. After traveling through Europe Lodge returned to Harvard where he became the first student of Harvard University to graduate with a Ph.D. in History. His teacher and mentor during his graduate studies was Henry Adams and Lodge began a life long friendship with Adams. Lodge wrote his dissertation on the ancient Germanic origins of Anglo-Saxon government. Throughout his career, Lodge would be a vocal proponent of the superiority of the Anglo-Saxon race. In 1871, he married Anna Cabot Mills Davis, the daughter of Admiral Charles Henry Davis and granddaughter of U.S. Senator Elijah Hunt Mills. His wife's maternal aunt was married to mathematician Benjamin Peirce and the mother of Charles Peirce. Henry and Anna had two sons, the noted poet George Cabot Lodge and John Ellerton Lodge, an art curator. He also graduated from the Harvard Law School in 1874 and was admitted to the bar in 1875. Lodge represented his home state in the United States House of Representatives from 1887 to 1893 and in the Senate from 1893 to 1924. In 1901, Henry Cabot Lodge proposed a bill in the Senate that would ban the use of alcohol to minors. He was one of four Republicans to rotate in the office of Senate president pro tempore from 1911-1913, holding the seat for just one day. As chairman of the Senate Foreign Relations Committee, he led the successful fight against American participation in the League of Nations, which had been proposed by President Woodrow Wilson at the close of World War I. He also served as chairman of the Senate Republican Conference from 1918 to 1924. During his term in office, he and another powerful senator, Albert J. Beveridge, pushed for the construction of a new navy. Lodge maintained that membership in the world peacekeeping organization would threaten the sovereignty of the United States by binding the nation to international commitments it would not or could not keep. It should be noted that Lodge did not object to the United States interfering in other nation's affairs--he was a proponent of imperialism (see Lodge Committee for further explanation). In fact, Lodge's key objection to the League of Nations was Article X, the provision of the League of Nations charter that required all signatory nations to deploy troops to repel aggression of any kind. Lodge felt that an open-ended commitment to deploy soldiers into conflict regardless of it being relevant to the national security interests of the United States was unacceptable. Lodge was also motivated by political concerns, Lodge strongly disliked Woodrow Wilson and was eager to find an issue for the Republican Party to run on in 1920. Senator Lodge argued in [1919] against the League: The United States is the world's best hope, but if you fetter her in the interests and quarrels of other nations, if you tangle her in the intrigues of Europe, you will destroy her powerful good, and endanger her very existence. Leave her to march freely through the centuries to come, as in the years that have gone. Strong, generous, and confident, she has nobly served mankind. Beware how you trifle with your marvelous inheritance; this great land of ordered liberty. For if we stumble and fall, freedom and civilization everywhere will go down in ruin. The League of Nations was established without U.S. participation in 1920. With headquarters in Geneva, Switzerland, it remained active until World War II. After the war, it was replaced by the United Nations, which assumed many of the League's procedures and peacekeeping functions; however it lacked the function of Article X that was present in the League of Nations. Ironically, Lodge's grandson and namesake served as U.S. Ambassador to the United Nations from 1953 to 1960. Lodge was also a vocal supporter of immigration restrictions. The public voice of the Immigration Restriction League, Lodge argued on behalf of literacy tests for incoming immigrants, appealing to fears that unskilled foreign labor was undermining the standard of living for American workers. In 1907-1911, he served on the Dillingham Commission, a joint congressional committee established to study the era's immigration patterns and make recommendations to Congress based on its findings. The Commission's recommendations led to the Immigration Act of 1917. Lodge died in 1924 of stroke at the age of 74. He was interred in the Mount Auburn Cemetery in Cambridge, Massachusetts.