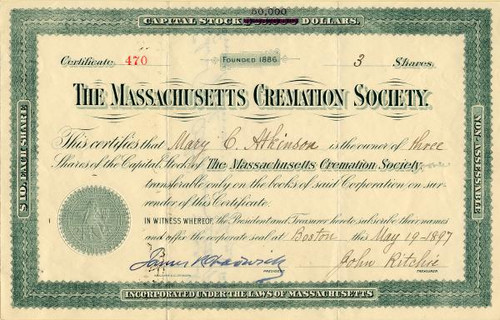 Beautiful certificate from the Massachusetts Cremation Society issued in 1897. This historic document was printed by W.A. Carrie Company and has an ornate border around it. This item has the signatures of the Company's President, James R. Chadwick and Treasurer, John Richie and is over 110 years old. The certificate was issued to Mary C. Atkinson and sign on the back of her executor. James R. Chadwick (1844-1905) As a leading Boston physician who specialized in women's health, Dr. James Chadwick helped support the inclusion of women within the then exclusively male medical profession. After earning his M.D. from Harvard in 1871, Chadwick helped establish the gynecological department of the Boston City Hospital in 1874, taught gynecology courses at Harvard Medical School, and eventually became president of the American Gynecological Society. In 1875, he was one of the founders of the Boston Medical Library, a rich collection of medical information for Boston physicians. In 1890, he served as the first president of the Harvard Medical Alumni Association. In 1850, the Women's Medical College of Pennsylvania opened, the first school in the country with the mission to train female doctors. Other schools, like the New York Infirmary School, soon began to offer similar programs to expand the number of women in medicine. Though debate over the acceptance of women in the medical profession continued, Chadwick authored a report that cited the contributions of the first generation of New York Infirmary's female graduates. Chadwick's report was a crucial asset for the advocates of women's medical education in their campaign to admit women into traditionally all-male medical schools. Across the U.S., medical schools began to accept women into their programs at the end of the nineteenth century, and by 1915 the American Medical Association had admitted its first female member. History from the papers of James Read Chadwick which are held at the Countway Medical Library: Provenance: Boston Medical Library.