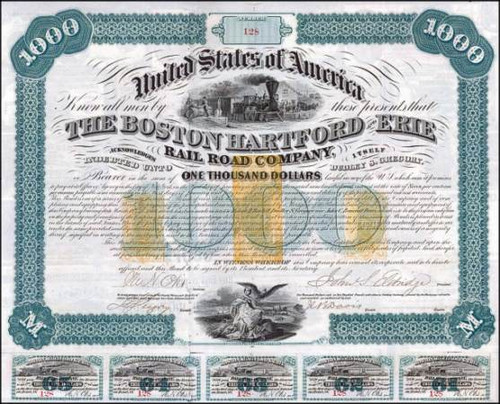 Beautifully engraved Certificate from the Boston, Hartford & Erie Railroad Company dated in 1866 and issued in 1867 . This historic document was printed by the National Banknote Company of New York and has an ornate border around it with a vignette of an early large stacked train passing a station blowing large clouds of smoke. There is another vignette on the lower center with an image of Columbia with an eagle on her sholder. This item is hand signed by its President (John S. Eldridge), Secretary (J. N. Otis) and Trustee (Dudley S. Gregory). This excellent certificate is over 122 years old. There are also 3 imprinted golden yellow Tax Revenue Stamps attached to its face and over 50 unused interest coupons attached to the bottom each printed with a train. John S. Eldridge was president of the Erie Railroad from October 1867 to July 1868 and was replace by a Robber Baron named Jay Gould in July 1868.