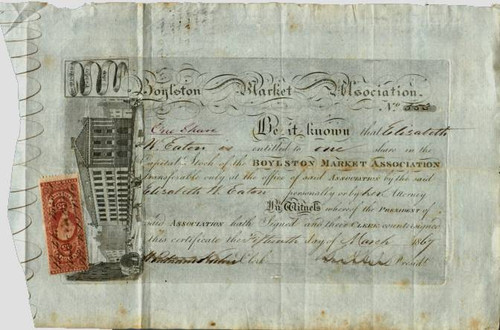 Beautiful early stock certificate from the Boylston Market Association issued in 1867. This historic document has a vignette of a city street. This item is hand signed by the Company's President and Clerk and is over 151 years old.

Certificate Vignette
The Boylston Market was at the corner of Boylston and Washington Streets in Boston. It opened in 1810. It was named for Ward Nicholas Boylston, John Adams' second cousin and a benefactor of Harvard College. Over the market is the main building called Boylston Hall, where several churches were organized, as well as a variety of theatrical ventures. Boylston Hall was leased for several years to the Handel and Haydn Society, and had also been used by the public schools for drill purposes. The building and associated complex was owned by the Boylston Market Association, of which John Quincy Adams was the first president. The land was bought at 75 cents a foot, and the building cost $20,000. History from the Old Stock Detective and OldCompany.com (old stock certificate research service)