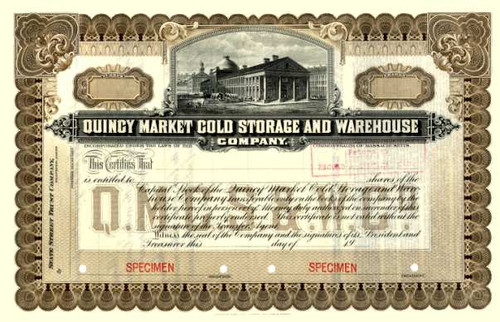 Beautifully engraved RARE SPECIMEN certificate from the Quincy Market Cold Storage and Warehouse printed in 1915. This historic document was printed by the American Banknote Company and has an ornate border around it with a vignette of Quincy Market and Faneuil Hall with old conastoga wagons in front. 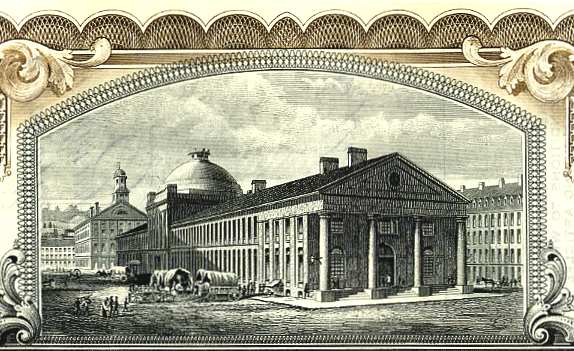 Certificate Vignette
Boston was incorporated as a city in 1822, and faced the challenges of growth into a metropolis. Food distribution was among the most pressing problems for the new city. Faneuil Hall (pictured here behind Quincy Market) had proven to be a useful with its 14,000 square feet of space, it was no longer nearly adequate to support the City's nearly 50,000 residents. The response required was larger than any one individual could provide, and would have a sweeping impact on the city. In a single sweep, Quincy Market enhanced city-life and commerce, caused the redesign and addition of six new streets, and established the City Docks in still deeper waters. About Specimen Certificates Specimen Certificates are actual certificates that have never been issued. They were usually kept by the printers in their permanent archives as their only example of a particular certificate. Sometimes you will see a hand stamp on the certificate that says "Do not remove from file". Specimens were also used to show prospective clients different types of certificate designs that were available. Specimen certificates are usually much scarcer than issued certificates. In fact, many times they are the only way to get a certificate for a particular company because the issued certificates were redeemed and destroyed. In a few instances, Specimen certificates we made for a company but were never used because a different design was chosen by the company. These certificates are normally stamped "Specimen" or they have small holes spelling the word specimen. Most of the time they don't have a serial number, or they have a serial number of 00000. This is an exciting sector of the hobby that grown in popularity and realized nice appreciation in value over the past several years.