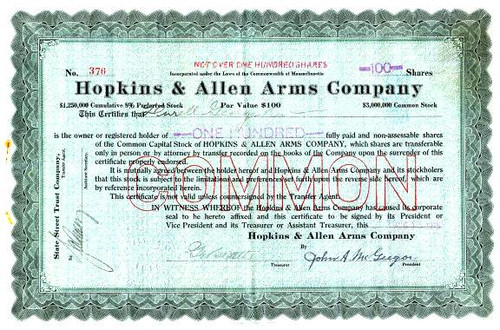 Beautifully engraved certificate from the Hopkins & Allen Arms Company issued in 1915. This historic document was printed by the American Bank Note Co. Boston and has an ornate border around it. This item is hand signed by the Company's President ( John A. McGregor ) and its Treasurer and is over 89 years old. The Hopkins and Allen company was founded in 1868 by S. S. Hopkins, C. W. Hopkins and C. H. Allen. The company experienced financial difficulties and in 1898 was reorganized as the Hopkins & Allen Arms Co. A fire in 1900 hurt them and in 1901, they were forced to merged with the Forehand Arms Company. The manufacture of Hopkins and Allen firearms ceased in 1917 when the plant was taken over by Marlin-Rockwell Corporation for the war time production of Browning automatic rifle components. Hopkins and Allen was well known for the many models of inexpensive revolvers and shotguns.