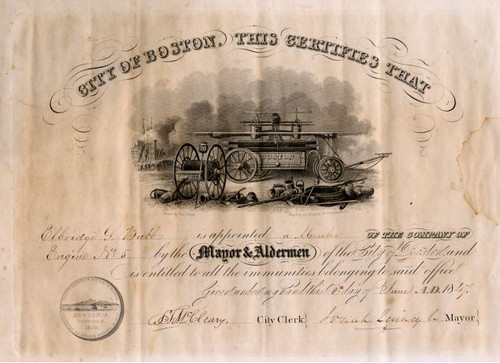 Beautifully printed Fire Department Appointment Certificate as a member of "Company of Engine No 5" from the City of Boston issued in 1847. This historic document has a vignette of an early fire truck and other fire fighting equipment drawn by Wm Groome, and engraved by Geo. G. Smith, 87 Washington St. This item is hand signed by the Boston's Mayor, Josiah Quincy and city Clerk, S. F. McCleary. This historic item is over 174 years old. The certificate was issued to Elbridge L. Babbs. Minor staining and foxing. 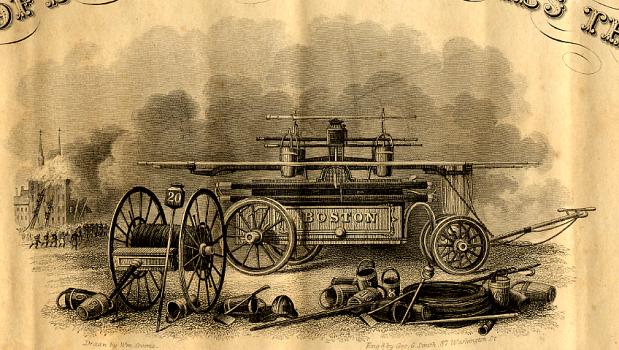 Certificate Vignette
Josiah Quincy was born in Boston on February, 4, 1772. He graduated from Harvard in 1790, studied law, and was admitted to the bar in 1793. He served in the Massachusetts Senate in 1805, and was a member in 1805-1813 of the national House of Representatives. After leaving Congress, he held various political offices until in 1823 he became mayor of Boston. As mayor he brought about municipal reform, and in 1829 resigned to become president of Harvard College. He remained president until 1845, during which time he made many reforms in grading and finances. His last years were spent on his farm in Quincy, where he died on July 1, 1864. He wrote a Memoir of his father (1825); a History of Harvard University (1840); the Journals of Mayor Samuel Shaw (1847); The History of the Boston Athenaeum (1851); The Municipal History of the Town and City of Boston (1852); a Memoir of the Life of J. Q. Adams (1858).