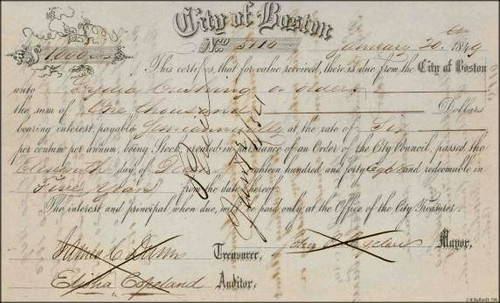 Beautifully engraved certificate from the City of Boston issued in 1849. This historic document has an ornate border around it. This item is hand signed by the City's Mayor ( City of Boston 1849 signed by Mayor John Prescott Bigelow), Auditor ( Elisha Copeland ) and Treasurer ( James C. Dunns ) and is over 153 years old. The was a note from the City of Boston to Lydia Cushing for the sum of $1000, payable semiannually at 6%. Dated January 20, 1849. By 1853-1854 Lydia must have died as it is endorsed after 1853 by William Cushing, Administrator. John Prescott Bigelow (1797-1872) of Boston, Suffolk County, Mass. Born in Groton, Middlesex County, Mass., August 25, 1797. Member of Massachusetts state house of representatives, 1828; secretary of state of Massachusetts, 1836; mayor of Boston, Mass., 1849-51. Died July 4, 1872. He graduated at Harvard College in 1815; studied law. He was president of the Common Council of the city of Boston; for several years Secretary of State for MA and subsequently mayor of Boston and member of the Executive Council. Mr. Bigelow laid the foundation of the Boston Public Library, which he had the satisfaction of seeing grow to the gigantic proportions of some 150,000 volumes and had been one of the trustees from its foundation until health compelled him to resign in Jan., 1869. Mayor Shurtleff, in presenting his resignation said of him that "he had ever been an ardent friend of the Library and that he gave the first money that was received towards the foundation." He expressed "great regret that his feeble health demanded the severance of the tie which had for so long a time connected him with this and other branches of the City Government." It was Mr. Bigelow's delight to do good and be useful, and he was entirely void of that selfishness and exclusiveness which is but too common among many in the higher walks of life.