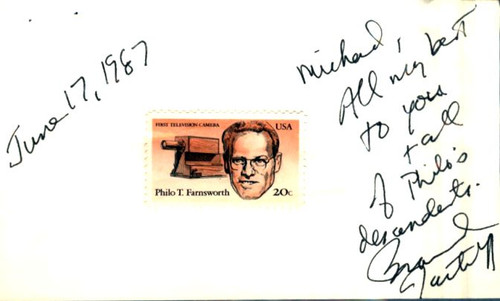 Brandon Tartikoff's signature on a 3" x 5" card over next to a Philo T. Farnsworth 20 Cent U.S. Postage Stamp. Philo T. Farnsworth invented the TV. The card is handwritten " Michael, All the best to you and the Philo decendents." Signed, Brandon Tartikoff Brandon Tartikoff (January 13, 1949 August 27, 1997) was a television executive who was credited with turning around NBC's low prime time reputation with such hit series as Hill Street Blues, L.A. Law, ALF, Family Ties, The Cosby Show, Cheers, Seinfeld, Miami Vice, The Golden Girls, Knight Rider, The A-Team, St. Elsewhere, Night Court, Hunter, Highway to Heaven, Matlock, Remington Steele, A Different World, 227 and Empty Nest. Tartikoff also helped develop Punky Brewster, for which he named the title character after a girl he had a crush on in school. Punky Brewster's pet dog Brandon was named after Tartikoff. He was also involved in the creation of the acclaimed Star Trek: Deep Space Nine and Beggars and Choosers. Tartikoff was hired as a program executive at ABC in 1976. One year later, he moved to NBC (after being hired by Dick Ebersol to direct comedy programming). Tartikoff took over programming duties at NBC from Fred Silverman in 1981.[2] At age 31, Tartikoff became the youngest president of NBC's entertainment division. When Tartikoff took over, a writers' strike was looming, affiliates were defecting and the network had only three prime time shows in the Top 20: Little House on the Prairie, Diff'rent Strokes and Real People. Johnny Carson was reportedly in talks to move his landmark late-night talk show to ABC. The entire cast and writers of Saturday Night Live had left that late-night sketch-comedy series, and their replacements had received some of the show's worst critical notices. By 1982, Tartikoff and his new superior, the highly regarded former producer Grant Tinker, turned the network's fortunes around. As head of NBC's Entertainment Division, Tartikoff's successes included The Cosby Show, for which Tartikoff had pursued actor-comedian Bill Cosby to create a pilot after having been impressed by Cosby's stories when Cosby guest-hosted The Tonight Show. Tartikoff wrote a brainstorming memo that simply read "MTV cops," and later presented the memo to series creator Anthony Yerkovich, formerly a writer and producer for Hill Street Blues. The result was Miami Vice, which became an icon of 1980s pop culture.[5] Knight Rider was inspired by a perceived lack of leading men who could act, with Tartikoff suggesting that a talking car could fill in the gaps in any leading man's acting abilities. During the casting process of Family Ties, Tartikoff was unexcited about Michael J. Fox for the role of Alex P. Keaton.[3] However, the show's producer, Gary David Goldberg, insisted until Tartikoff relented, saying "Go ahead if you insist. But I'm telling you, this is not the kind of face you'll ever see on a lunch box". Some years later, after the movie Back to the Future cemented Fox's stardom, Fox good-naturedly sent Tartikoff a lunch box with Fox's picture on it and a note inside reading: "To Brandon: This is for you to put your crow in. Love and Kisses, Michael J. Fox." Tartikoff kept the lunch box in his office for the rest of his career. Johnny Carson broke the news of his retirement in February 1991 to Tartikoff at the Grille in Beverly Hills. For several days only Tartikoff and NBC Chairman Bob Wright knew of the planned retirement. Tartikoff wrote in his memoirs that his biggest professional regret was cancelling the series Buffalo Bill, which he later went on to include in a fantasy "dream schedule" created for a TV Guide article that detailed his idea of "The Greatest Network Ever." During his time at NBC, he made appearances in several of the network's shows. He hosted Saturday Night Live in 1983 and appeared as himself in an episode of Saved by the Bell, where, very tongue-in-cheek, he shortly entertains the notion of a "show about a high school principal and his kids," before scoffing at the idea. During his 1983 appearance on Saturday Night Live, one skit featured Tartikoff in a black leather ensemble, with the words "Be There" spelled out in rhinestones on the back of his jacket. "Be There" was NBC's slogan during the 19831984 season, a fitting example of clever hidden advertising. He also appeared as himself in episodes of Night Court and ALF, and in the background of one of the final episodes of Cheers. David Leisure also played Tartikoff in an episode of ALF. He left NBC in 1991, moving to Paramount Pictures to become its chairman. A year later, Brandon left that post to spend more time with his daughter, Calla, who was injured in a car crash near the family's Lake Tahoe home. In 1994, he made his comeback to national TV with Last Call, a short-lived late-night discussion show he produced. That same year he also produced The Steven Banks Show for PBS. Later that year, he began a brief run as chairman of New World Entertainment. Just prior to his death, Tartikoff served as the chairman of the AOL project "Entertainment Asylum," for which he teamed with Scott Zakarin to build the world's first interactive broadcast studio. History from Wikipedia and OldCompany.com (old stock certificate research service)