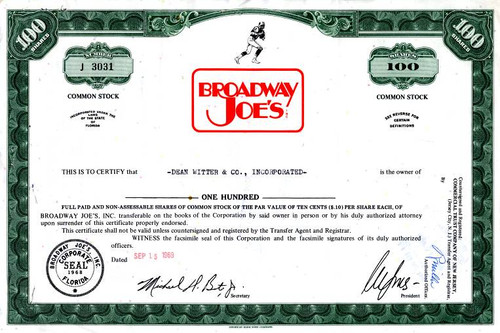 Beautifully engraved certificate from the Broadway Joe's issued in 1969. This historic document was printed by the American Banknote Company and has an ornate border around it with a vignette of a Joe Namath ( No 12 ) preparing to throw a pass. This item has the printed signatures of the company's president ( Thomas Marshall ) and secretary ( Michael Bite ) and is over 35 years old. 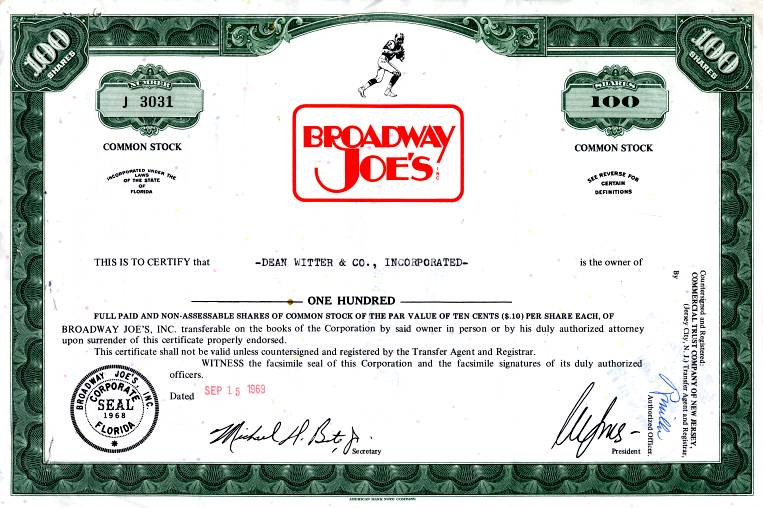 Certificate
The company was incorporated on 05/17/1968 and dissolved on 07/11/1972. The officers of the company were as follows: Thomas Marshall Michael Bite William K. Cash C. J. Achee Joseph W. Namath The year of this certificate was 1969 when Super Bowl III took place in January. The Jets were given little chance of winning Super Bowl III against the Baltimore Colts since the AFL Champions had been beaten decisively by the NFL Champions in the first two Super Bowls, and many experts did not think the Jets were as strong as the Kansas City and Oakland teams that lost in Super Bowls I and II. One writer predicted a 55-0 Colts rout and another forecasted a 48-6 Baltimore victory. However, Namath rallied his team and all AFL supporters at a Super Bowl week awards dinner by declaring to a surprised audience, "The Jets will win on Sunday, I guarantee you." Namath completed 17 of 28 passes for 206 yards and the aroused Jets made big defensive plays to stun the Colts 16-7, completing a super season. Namath, Joe (1943- ), American football player, who led the New York Jets to the 1969 Super Bowl championship. He was born Joseph William Namath in Beaver Falls, Pennsylvania. A star quarterback at the University of Alabama, Namath signed a contract with the New York Jets of the American Football League in 1965; at that time it was the highest-paying contract ever in professional football. He quickly became a favorite among fans and earned celebrity status with the media. Before the 1969 Super Bowl Namath publicly guaranteed that the Jets would defeat the heavily-favored Baltimore Colts, the defending champions. He then led the Jets to the Super Bowl victory and was named the game's most valuable player. Namath won the 1969 S. Rae Hickok award as the professional athlete of the year. Also in 1969 he began an off-season career as an actor, appearing in several films and television shows. Namath played one season (1977-1978) with the Los Angeles Rams before his retirement from football in 1978. After retiring he continued working as an entertainer and became a business entrepreneur and television sports broadcaster. Also known as Broadway Joe, Namath was elected to the Pro Football Hall of Fame in 1985.