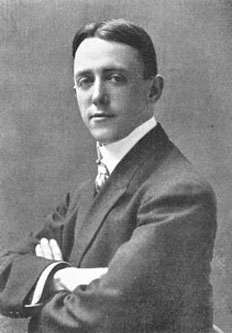 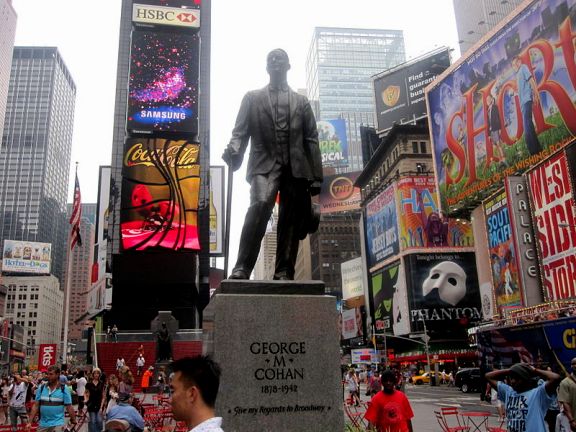 Cohan's "Give My Regards to Broadway" statue in Times Square in New York City
George Michael Cohan (pronounced Ko-han; July 3, 1878 November 5, 1942), known professionally as George M. Cohan, was a major American entertainer, playwright, composer, lyricist, actor, singer, dancer and producer. Cohan began his career as a child, performing with his parents and sister in a vaudeville act known as "The Four Cohans." Beginning with Little Johnny Jones in 1904, he wrote, composed, produced, and appeared in more than three dozen Broadway musicals. Cohan wrote some 500 songs during his lifetime, including the standards "Over There", "Give My Regards to Broadway", "The Yankee Doodle Boy" and "You're a Grand Old Flag". As a composer, he was one of the early members of the American Society of Composers, Authors, and Publishers (ASCAP). He displayed remarkable theatrical longevity, appearing in films until the 1930s, and continuing to perform as a headline artist until 1940. Known in the decade before World War I as "the man who owned Broadway", he is considered the father of American musical comedy.[1] His life and music were depicted in the Academy Award-winning film Yankee Doodle Dandy (1942) and the 1968 musical George M!. A statue of Cohan in Times Square in New York City commemorates his contributions to American musical theatre. History from Encyberpedia and OldCompany.com (old stock certificate research service)