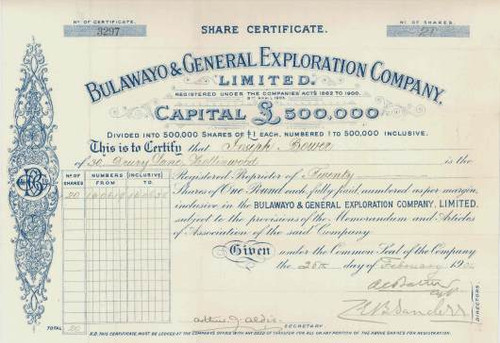 Beautifully engraved certificate from the Bulawayo & General Exploration Company issued in 1904. This item is hand signed by the Company's Directors and Secretary and is over 107 years old. Bulawayo is located in Zimbabwe. Zimbabwe is a landlocked country in Southern Africa which borders South Africa to its south, Mozambique to its east, Botswana to its west and Zambia to its north. English is the official language and is widely spoken in all parts of the country. Major indigenous languages are ChiShona, spoken in the north, and SiNdebele, spoken in the south. Agriculture forms the basis of the Zimbabwean economy. Cotton, tobacco and sugarcane are Zimbabwe's three main crops and manufacturing industries rely on these crops for the production of goods such as sugar and textiles. Horticultural production is a rapidly growing sector and has become Zimbabwe's second highest export earner after tobacco. Gold mining is also a vital economic activity. Zimbabwe's tourism industry has the potential to be the fastest growing sector in the country's economy. Zimbabwe ranks fourth out of the top tourist destinations in Africa.