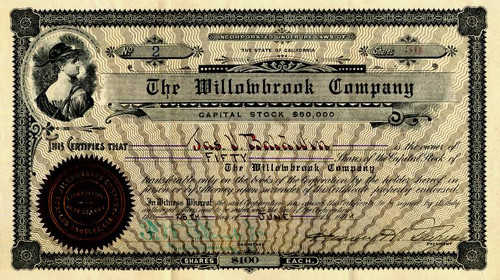 Beautiful RARE certificate from the The Willombrook Company issued in 1904. This historic document has an ornate border around it with a vignette of the back-profile of a woman wearing a cap with a shining star. This item has the the signatures of the Company's President, Harvey H Duryee and Secretary, F. W. Flint, Jr and is over 107 years old. Issued to and endorsed by Jas.V. Baldwin. 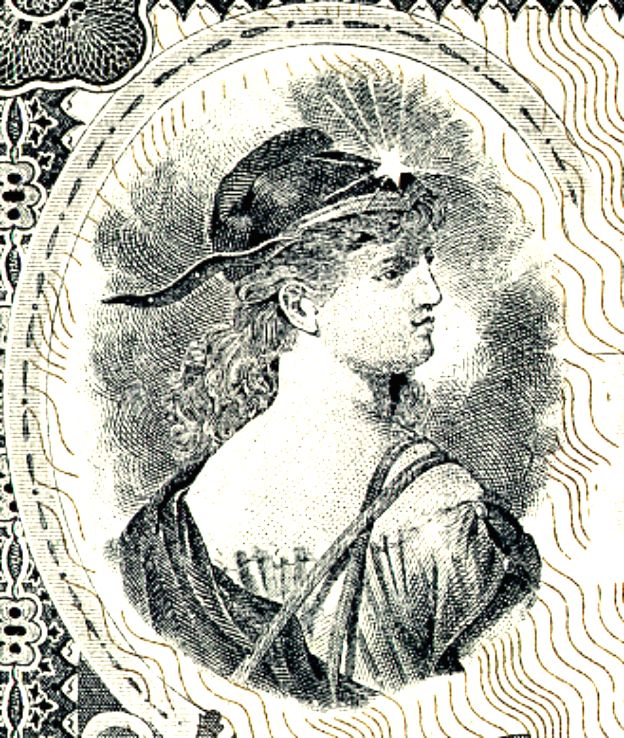 Certificate Vignette
Willowbrook is an unincorporated community and census-designated place (CDP) in Los Angeles County, California. The population was 35,983 at the 2010 census, up from 34,138 at the 2000 census. The community is located near the southeast edge of, and is often considered part of, South Los Angeles. Willowbrook is often mistaken to be the city of Compton because they share the zipcode 90222, and the majority of residents use Compton as their mailing address. The north side of Willowbrook is often confused with Watts and Los Angeles City because of the zipcode 90059. Willowbrook is the home of the troubled Martin Luther King Jr.-Harbor Hospital, which had been cited multiple times for failures in hospital accreditation. Also located in Willowbrook is the Charles R. Drew University of Medicine and Science, which oversees residency training programs, allied health programs, a medical education program (jointly with the University of California, Los Angeles), a medical magnet high school, the area Head Start program, and various centers for health disparities research. Due to severe deficiencies, the former King/Drew Medical Center lost accreditation of several key residency training programs. Willows and a slow, shallow brook distinguished this portion of the Los Angeles plain long before it was given the name "Willowbrook." A lone-standing streamside willow tree near the present intersection of 125th Street and Mona Boulevard was an original rancho boundary marker in the 1840s. Willowbrook was rich in springs in the early days and winter rains would bring up fine stands of rye grass between gravelly ridges left by long-ago floods of the Los Angeles River. As early as 1820, Anastacio Avila was grazing cattle on the land and by 1843, the Mexican governor had granted him 3,599 acres (14.56 km2). This grant was named the Rancho La Tajauta and it extended from the marshes along present Alameda Street westward to approximately the present line of the Harbor Freeway. All of present-day Willowbrook is within the area covered by Rancho La Tajauta. The first subdivisions in the Willowbrook area were filed in 1894 and 1895 on land along what is now Rosecrans Avenue. The first official use of the name Willowbrook came in 1903, when the Willowbrook Tract was recorded with the County Recorder. The tract straddled the newly opened Pacific Electric railway line to Long Beach. There is no evidence that a townsite was envisioned and street patterns were not coordinated with adjacent tracts. The name Willowbrook came into use for the whole area, because the Big Red Cars of the Pacific Electric Railroad Company stopped at 126th Street in Willowbrook. Lot buyers in Willowbrook expected to live a definitely suburban life. The deep lots (in many cases as deep as 300 feet, or 91 meters) attracted working-class families, especially newcomers to Southern California. The Big Red Cars provided fast, reasonable transportation to department stores in downtown Los Angeles and to jobs in the Long Beach and San Pedro harbor areas. During the Depression years, residents used the land behind their homes to grow fruits and vegetables, run hogs, and raise chickens. These land uses, together with the vacant lots covered with mustard plants, intensified the area's rural appearance. After the end of the Depression and World War II, increasing suburban development occurred in Willowbrook, but not to the extent that it substantially altered the area's rural character. Even the 1965 Watts Riots did not change that, although Willowbrook suffered damage to a number of its buildings, including Willowbrook's community library. The mixture of suburban and rural land uses continued in Willowbrook into the early 1980s, when the area began to lose its rural character due to a redevelopment plan drafted by the Watts Labor Community Action Committee (WLCAC) under the leadership of Ted Watkins and supported by Los Angeles County. Under this plan, 365 acres (1.48 km2) of Willowbrook land was redeveloped to provide new commercial and residential facilities. As a result, present-day Willowbrook appears similar to other communities in the South Central section of Los Angeles. History from Wikipedia and OldCompany.com (old stock certificate research service).