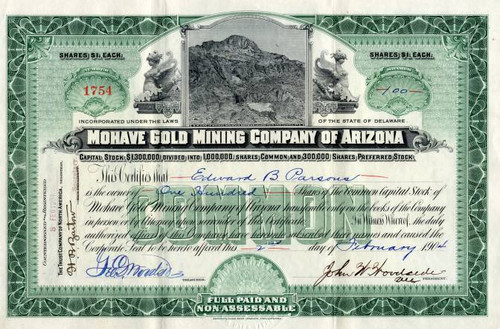 Beautifully engraved certificate from the Mohave Gold Mining Company of California issued in 1904. This historic document was printed by the American Banknote Company and has an ornate border around it with a vignette showing the side of Mohave Mountain and the Leland Vein and Tunnel. This item has the hand signatures of the Company's officers and is over 108 years old.

Certificate Vignette
As Reported in 1907: Location.--The Leland mine is located just west of Vivian, on the western part of the Leland vein, in the upper part of Leland Monument Butte. The elevations vary between 2,400 and 3,000 feet. History and developments - The Leland property is reported to have been purchased from earlier owners in 1902 by Col. Thomas Ewing, who in 1903 sold it to the present company, the Mohave Gold Mining Company (which until January, 1907, was known as the Mount Mohave Gold Mining Company). Common reports give the price as $550,000. The property comprises a group of eight patented claims, of which the Leland and the Mitchell are the most important. Immediately after the acquisition of the property the company began developments and operations on an unusually large scale. It installed a 12-chute ore bin at the mine at a cost of over $26,000 and a 40-stamp mill at a point which later became known as Milltown, 11 miles southeast of the mine, about 5 miles from the river, in the open, flat valley of the Colorado 6 miles from Spears Lake. It also installed a large pumping plant on the Colorado 2 miles below Needles, where, with a large Corliss engine, water was pumped through an 8-inch pipe line to the mill. In conjunction with these developments 17 miles of narrowgage railway, the Mohave and Milltown Railroad, was built by an auxiliary company, it is said, at a cost of $268,000, from the east bank of the Colorado opposite Needles via Milltown to the mine. The freight and ore were taken across the river by ferry at Needles, where connection was made with the Santa Fe Railway. The Midnight mine is about 2.5 miles northwest of Oatman. History from Wikipedia and OldCompany.com (old stock certificate research service)