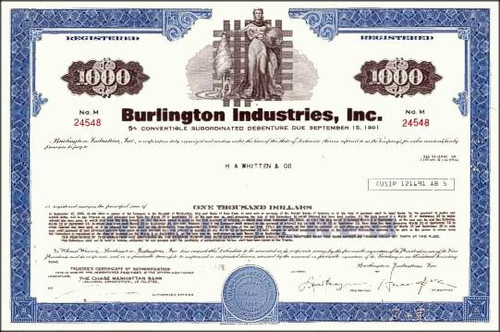 Beautifully engraved certificate from the Burlington Industries Incorporated issued in 1970-77. This historic document was printed by the Security-Columbian Banknote Company and has an ornate border around it with a vignette of an allegorical woman holding a globe. This item has the printed signatures of the Company's President and Secretary and is over 24 years old. 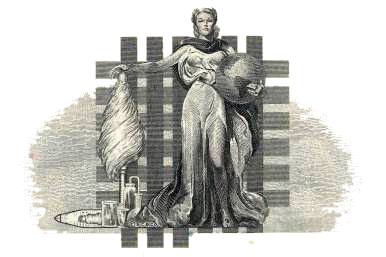 Certificate Vignette
November 15, 2001 - Burlington Industries Inc. BUR.N, one of the United States' largest textile companies, is expected to file for protection from its creditors in U.S. bankruptcy court as soon as Thursday, according to people familiar with the matter, The Wall Street Journal's online edition reported on Thursday. In common with other textile companies, cheaper imports have hurt Burlington, which makes fabric and textiles used to produce apparel and interior furnishings, the paper said. The Greensboro, North Carolina-based company is expected to file for protection under Chapter 11 of the United States bankruptcy code to try and reduce its debt and reorganize as an independent company, said a person familiar with the situation, the Wall Street Journal said. A company spokesman, Ross Haymes, declined to comment, the paper said. Burlington has arranged for $190 million in debtor-in-possession financing from a consortium of banks led by J.P. Morgan JPM.N, according to sources, The Wall Street Journal said. The financing will allow the company to continue operating as it reorganizes, the paper said. Burlington is one of a growing group of companies to seek bankruptcy protection after the September 11 attacks on the United States and the consequent economic slowdown, The Wall Street Journal said. But the company planned to file for bankruptcy protection before the attacks, said the person familiar with the situation, according to the paper. History Burlington Industries, Inc. is named for Burlington, North Carolina, where the company was founded in 1923 and the first small plant was completed in 1924. Founder J. Spencer Love, a 27-year old returning home from World War I, received strong support from the Burlington Chamber of Commerce and chartered "Burlington Mills" on November 6, 1923. The first plant employed 200 people, weaving typical cotton fabrics for flags, curtains, dresses and diapers. After only a year Love, eager for his new company to stand out from the crowd, decided to switch to the new experimental synthetic fiber rayon. His rayon bedspreads were an instant hit, and within a few years Burlington was the nation's largest producer of rayon fabrics. By then the newcomer had staked out a lasting reputation for market savvy and progressive ideas. A second plant was built in 1926, and the firm opened its own New York sales office in 1929. During the Depression many competitors' mills that closed were later bought by Love and reopened under the Burlington banner. By the end of 1936, Burlington had 22 plants and sales of $25 million. In 1937, Burlington Mills came of age with its listing on the New York Stock Exchange. With the outbreak of World War II, more than 4,000 Burlington employees entered the military. Burlington produced more than 50 items for the armed forces and was a leader in wartime projects such as the development of parachute cloth made with the new synthetic fiber, nylon. After the war, the company continued to grow and diversify. Love bought more than a dozen companies that were leaders in specific product niches Burlington lacked. He built new plants with one wooden wall that could be torn down on short order to add more floor space. The wooden wall made Burlington's plants easy to spot and was a signpost of the company's post-war growth. The company was becoming so large and diversified that the name "Burlington Mills" no longer fit, so in 1955 the name was changed to Burlington Industries. By 1960 Burlington was the parent company for 17 constituent companies, making everything from ribbon and suiting fabrics to hosiery and carpets and operating more than 100 plants. After guiding the company for nearly 40 years, founder J. Spencer Love died in 1962. From the beginning, he and his company were known for bold, innovative ideas. An early leader in rayon fabrics, Burlington was also the first textile company to advertise on network television (1952) and the first to reach $1 billion in sales (1962). It pioneered the latest organizational management concepts and employee relations practices. The company patented many unique products and processes and zealously pursued new market opportunities as the population grew, lifestyles changed and living standards improved. In the mid-1970s Burlington launched a 10-year, $2 billion capital expenditure program, a scope unprecedented in the textile industry. The result was a world-class manufacturing base that positioned the company for worldwide competition. In 1987, corporate raiders attempted a hostile takeover of Burlington, but the company went private through a leveraged buyout. It preserved its name, its reputation and its core businesses, while being forced to divest its European operations and industrial fabrics divisions. Five years later, a restructured, revitalized Burlington returned to the New York Stock Exchange as a public company. Today Burlington employs approximately 15,000 people and operates plants in the United States, Mexico and India. Constantly changing, continually growing, Burlington is always a leader and an innovator in the global market.