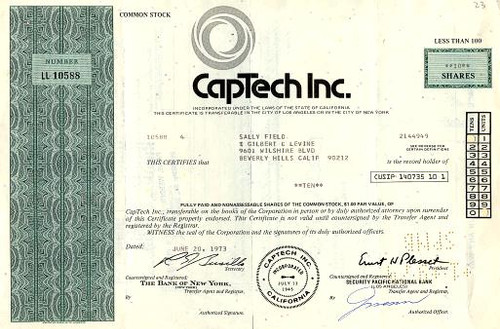 Beautiful certificate from the CapTech Inc issued in 1973. This historic document was printed by American Banknote Company and has an ornate border around it with a vignette of the company logo. This item has the signatures of the Company's President and Secretary and is over 37 years old. The certificate was issued to and signed by Sally Field. 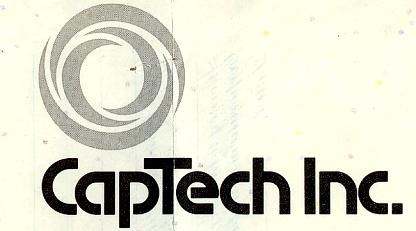 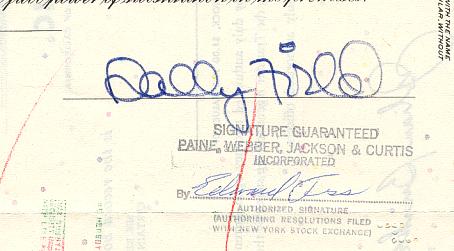 Sally Field Signature on Back
Sally Margaret Field (born November 6, 1946) is a two-time Academy Award winning American actress. She is also a two-time Emmy Award and two-time Golden Globe Award winner who became a household name at age 20 as Sister Bertrille in the 1960s sitcom The Flying Nun. She is currently starring as Nora Holden Walker on the ABC hit drama, Brothers & Sisters, as a grieving matriarch who helps out in the family business. Her newest film, Two Weeks came out in early 2007. Field was born in Pasadena, California. Her parents, Richard Dryden Field and Margaret Field (a Southern-born actress), divorced in 1950. Her mother subsequently remarried, to actor and stuntman Jock Mahoney. She attended Birmingham High School in Van Nuys, California. Among her classmates were famed financier Michael Milken and fellow actress Cindy Williams (of Laverne and Shirley fame). Field at Expo 67.Field got her start on television, starring as the boy-struck surfer girl in the mid-1960s surf culture sitcom series Gidget. She then went on to star in her best known television role, as Sister Bertrille in The Flying Nun. Field also appeared in The Girl with Something Extra. While starring on The Flying Nun, Sally tried her hand at singing, releasing an album on Colgems Records in 1968 and cracking the Billboard Hot 100 with one single, "Felicidad", in 1967. She had several guest appearances, including a recurring role on the western comedy Alias Smith and Jones starring Pete Duel (whom she worked with on Gidget) and Ben Murphy, and the "Rod Serling's Night Gallery" episode 'The whisper'. Having played mostly comic characters on television, Field had a difficult time being cast in dramatic roles. She studied with famed acting teacher Lee Strasberg. Soon after, Field landed the title role in the 1976 TV film Sybil. Field's dramatic portrayal of Sybil, a young woman afflicted with multiple personality syndrome in the TV film not only garnered her an Emmy Award in 1977, but also enabled her to break through the typecasting she had experienced from television roles. Field had a number of critical and commercial successes in movies, particularly in the 1980s. In 1977 she co-starred with Burt Reynolds, Jackie Gleason and Jerry Reed in that year's #2 grossing film Smokey and the Bandit. In 1979, she starred as a union organizer in Norma Rae, and won the Academy Award for Best Actress. In 1981, Field played a prostitute opposite Tommy Lee Jones in the South-set comedy Back Roads, which received middling reviews and grossed $11 million at the box office. She won another Oscar in 1985 for her starring role in Places in the Heart. Her gushing acceptance speech is well-remembered for its earnestness. In it, Field stated "I haven't had an orthodox career, and I've wanted more than anything to have your respect. The first time I didn't feel it, but this time I feel it, and I can't deny the fact that you like me, right now, you like me!". The line ending in "...I can't deny the fact that you like me, right now, you like me!" is often misquoted as simply "You like me, you really like me!" which has subsequently been the subject of many parodies. (Field parodied the line herself in a commercial.) Also in 1985, she co-starred with James Garner in Murphy's Romance. In A&E's biography of Garner, Field reported that her on-screen kiss with Garner was the best cinematic kiss she had ever had. Field appeared on the cover of the March 1986 issue of Playboy magazine. She was the "Interview" subject in that month's issue. (She did not appear as a pictorial subject inside the magazine, although she did wear the classic leotard and bunny ears "Bunny Outfit" on the cover). She has had supporting roles in other movies, including Mrs. Doubtfire (1993) in which she played the wife of Robin Williams and the love interest of Pierce Brosnan, followed by the role of Forrest's mother in Forrest Gump (1994). She is only 10 years older than Tom Hanks, with whom she had co-starred six years earlier in Punchline (film). On television, Field had a recurring role on ER in the 2000-2001 season as Dr. Abby Lockhart's mother Maggie, who is struggling to cope with bipolar disorder, a role for which she won an Emmy Award in 2001. After her critically acclaimed stint on the show, she returned to the role in 2003 and 2006. She also starred in the very short-lived 2002 series The Court. Field has also ventured into the realm of directing. Her first directorial stint was for the television film, The Christmas Tree (1996). She also directed the feature film Beautiful (2000), as well as an episode of the TV mini-series, From the Earth to the Moon (1998). Field was a late addition to the ABC drama Brothers & Sisters, which debuted in September 2006. In the show's pilot, the role of matriarch Nora Walker had been played by noted actress Betty Buckley. However, the producers of the show decided to take the character of Nora in another direction, and Field was cast in the role. She is nominated for an 2007 Emmy Award--Outstanding Lead Actress in a Drama Series--for playing Nora Walker. Field also has an upcoming voice role as Princess Ariel's mother in Disney's The Little Mermaid III. This movie is scheduled for a direct-to-DVD release on 2008. Field dated Burt Reynolds for many years. She was first married to Steven Craig from 1968 to 1975. In 1984, she married Alan Greisman. The couple divorced in 1993. History from Wikipedia and OldCompanyResearch.com (old stock certificate research service).