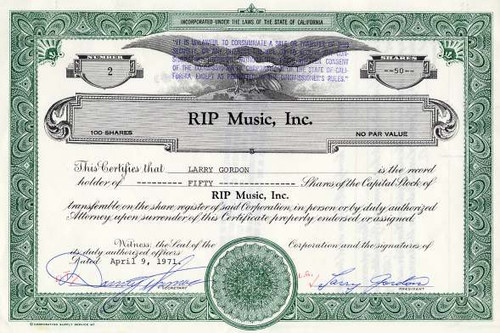 Beautifully engraved certificate from RIP Music, Inc.issued in 1971. This historic document has an ornate border around it with a vignette of an eagle standing on top of a globe. This item is hand signed by the Company's President and Secretary and is over 33 years old.

Certificate Vignette
Danny Thomas (January 6, 1914 - February 6, 1991) was an American television and film actor. Thomas was born in Deerfield, Michigan. His most famous role was his television show called Make Room for Daddy also called the Danny Thomas Show. He worked many years with St Jude Hospital for children with cancer. Larry Gordon was Paul Williams' manager and who had gotten"We've Only Just Begun" to the Carpenters. He opened the music publishing company, RIP Music, Inc., with comedian Danny Thomas.