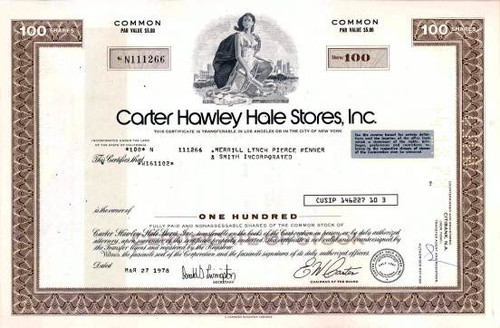 Beautifully engraved certificate from the Carter Hawley Hale Stores Incorporated issued in 1974-78. This historic document was printed by the Jeffries Banknote Company and has an ornate border around it with a vignette of an allegorical woman infront of a city skyline. This item has the printed signatures of the Company's Chairman of the Board (E. W. Carter) and Secretary and is over 25 years old. 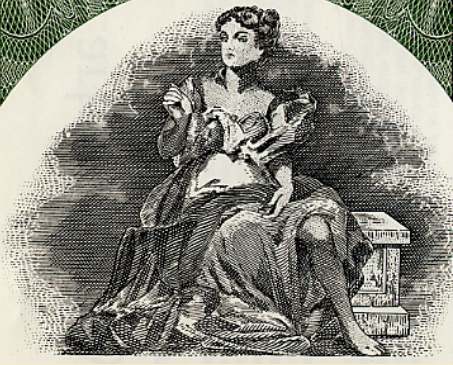 Certificate Vignette
The Carter Hawley Hale stores was the largest retailing chain on the West coast, and sixth largest in the country in 1984. Based in Los Angeles, its nationwide empire stretched from trendy LA bargain basements to tiny Fifth Avenue boutiques, with a bookstore chain in between. Operating under the CHH flag were Bergdorf-Goodman, The Broadway, Contempo Casuals, Emporium-Capwell, Hole Renfrew, Neiman-Marcus, Thalimers, Walden Books, John Wanamaker, and Weinstock's. On February 11, 1991, the Company filed a voluntary petition for relief under chapter 11 of the United State Bankruptcy Code in the United States Bankruptcy Court for the Central District of California (the During the bankruptcy proceedings, the Company managed its affairs and operated its business as debtor in possession under the supervision of the Bankruptcy Court while it developed a reorganization plan to restructure the Company.