Beautifully engraved certificate from the Waldorf Systems Incorporated issued in 1936-1965. This historic document was printed by the American Banknote Company and has an ornate border around it with a vignette of the company's Apple Logo with allegorical owman on both sides. This item has the printed signatures of the Company's President and Treasurer and is over 37 years old. 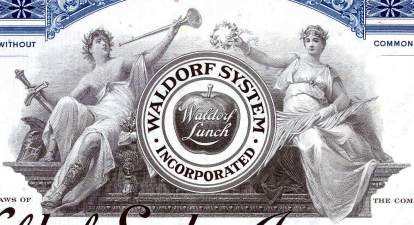 Certificate Vignette
Out of the luncheonette evolved the lunchroom, most retaining the lunch counter as a principal feature. By 1920, chains of lunchrooms were well established in most large cities, although most chains comprised only two or three establishments sharing a name and advertised as "a system." Larger chains also shared central commissaries as well. Waldorf Lunch operated a total of 75 stores spread from Springfield, Massachusetts, where the company was headquartered, to New York, Boston, Buffalo, and Providence. The lunchrooms operated by Child's Unique Dairy Lunch in New York City occupied, as with all the chains, standard storefronts. Locations were pedestrian-oriented and were sited, accordingly, along streetcar lines or near subway station entrances. Each restaurant was long and narrow, its axis perpendicular to sidewalk and street. Down one side ran a long counter, with a line of stools, tables, and chairs filling the remainder of the room. Customers on stools sat facing the countermen (eventually replaced by waitresses), and, of course, a rear counter where food was prepared. On entering, customers received a ticket to be stamped, paying a cashier as they left. However, at Waldorf locations, as well as at Baltimore Lunch locations, food supplied from central commissaries was dispensed at counters in the rear of each store and carried by customers on trays to one-armed chairs or to small booths.