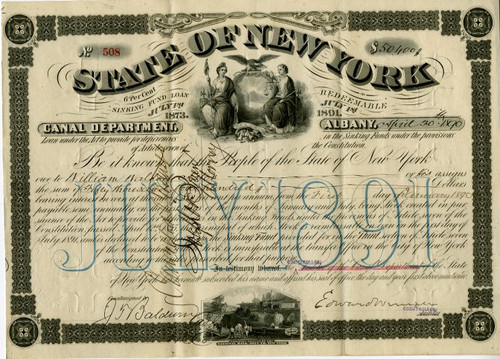 Beautifully engraved certificate from the State of New York, Canal Department dated in 1890. This document, which is signed by a State Comptroller, was printed by the National Bank Note Company, and measures approximately 12" (w) by 8 1/2" (h). The bond is issued to William Waldorf Astor and the Power of Attorney is hand signed by William Waldorf Astor. This historic document was printed by the National Banknote Company and has an ornate border around it with a vignettes of a canal scene - complete with a barge, horses, cattle and a train - appears at the bottom center. The New York State Seal is shown on top center. This item has the signature of the State Controller. 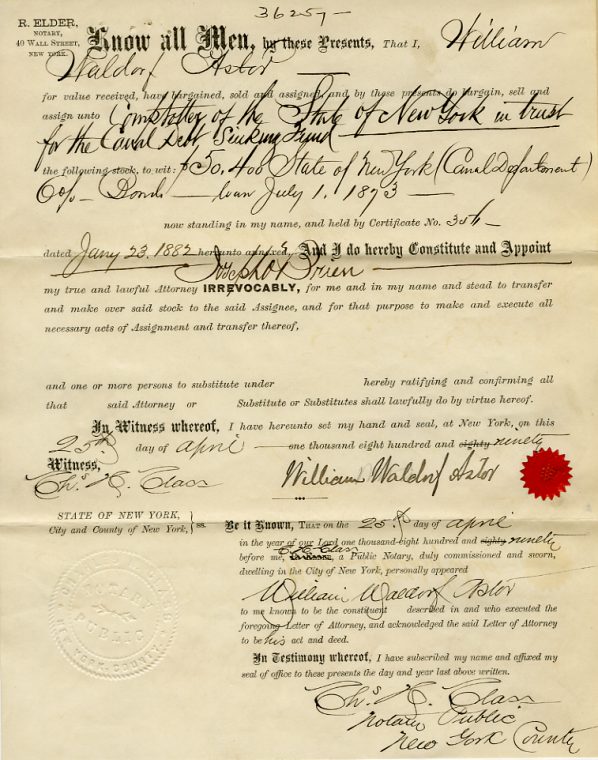 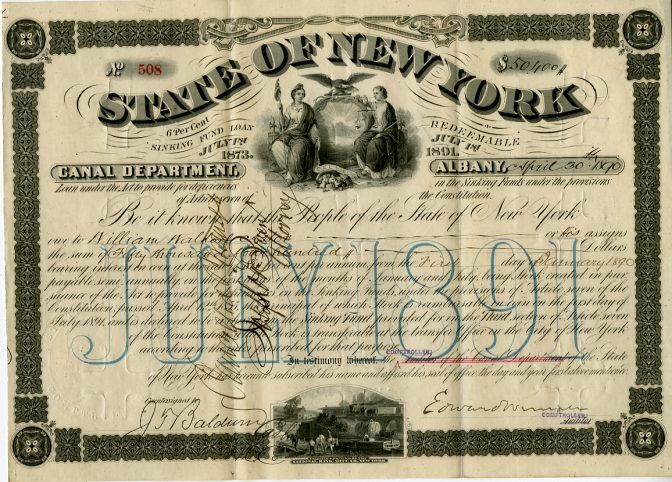 William Waldorf Astor signed power of attorney
William Waldorf "Willy" Astor, 1st Viscount Astor[1] (March 31, 1848 October 18, 1919), was a wealthy American-born attorney, politician, philanthropist, and newspaper publisher. Astor moved with his family to England in 1891, became a British subject in 1899, and was made a peer as Baron Astor in 1916 and Viscount Astor in 1917 for his contributions to war charities. He was a prominent member of the Astor family. William Waldorf Astor was born in New York City. He was the only child of financier and philanthropist John Jacob Astor III (18221890) and Charlotte Augusta Gibbes (18251887). He studied in Germany and in Italy under the care of private tutors and a governess. He grew up in a cold and distant household. In his early adult years, Astor returned to the United States and went to Columbia Law School. He was called to the United States Bar in 1875.[2] He worked for a short time in law practice and in the management of his father's estate of financial and real estate holdings. After some time practicing law, Astor thought he had found his true calling and an opportunity to make a name for himself outside of his family's fortune by entering the political realm. In 1877, with his eyes set on the United States Congress, Astor entered New York City politics as a Republican.[5] He was elected as a member of the New York State Assembly (New York Co., 11th D.) in 1878; and of the New York State Senate (10th D.) in 1880 and 1881.Astor was likely supported by the boss of the New York State Republican machine, Roscoe Conkling, with whom his family was involved. In 1881, Astor was defeated by Roswell P. Flower as a candidate for the United States Congress. A second attempt at the seat also resulted in defeat. His shy nature could not handle the political attacks on his character. This was the end of his political career. The press used his political failures as fodder for harsh criticisms. In 1882, President Chester A. Arthur appointed Astor Minister to Italy, a post he held until 1885. He told Astor, "Go and enjoy yourself, my dear boy." While living in Rome, Astor developed a lifelong passion for art and sculpture. Upon the death of his father in February 1890, Astor inherited a personal fortune that made him the richest man in America. In 1890, he initiated construction of the luxurious Waldorf Hotel in New York, being built on the site of his former residence. At 13 stories high it dwarfed his aunts' house next door which caused family friction. Later her son, and his cousin, Colonel John Jacob "Jack" Astor IV (18641912) built the adjoining Astoria Hotel in 1897 on the site of her house, and the complex became the Waldorf-Astoria Hotel. History from Wikipedia and OldCompany.com (old stock certificate research service)