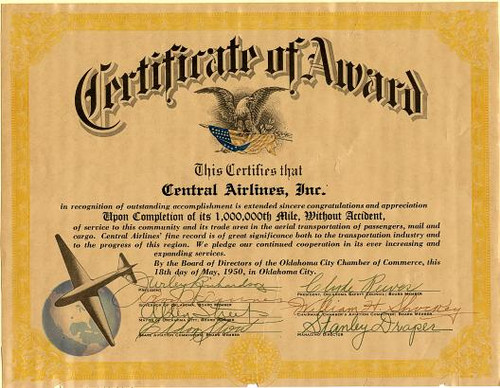 Beautiful certificate to Central Airlines, Inc. from the City of Oklahoma issued in 1950 . This historic document and has an ornate border around it with a vignette of an eagle holdinmg an american Flag. This item is signed by representatives of the City Chamber of Commerce, The Mayor (Allen Street) , the Governor (Ron J. Turner) and the State Aviation Commission. It is over 59 years old.

Certificate Vignette
This unique and one of a kind certificate was awarded to Central Airlines by the City Of Oklahoma in recognition of one million miles flown from / to the city without an accident. The certificate was issued by the city on May 18, 1950. Turner, Roy Joseph (1894-1973) -- also known as Roy J. Turner -- of Oklahoma City, Oklahoma County, Okla. Born in Kendrick, Lincoln County, Okla., November 6, 1894. Son of Reason Turner and Etta Louise (Rogers) Turner; married 1937 to Jessica E. Grimm. Democrat. Served in the U.S. Army during World War I; real estate business; oil producer; rancher; delegate to Democratic National Convention from Oklahoma, 1944, 1948, 1956; Governor of Oklahoma, 1947-51. Methodist. Member, American Legion; Freemasons. Died in Oklahoma City, Oklahoma County, Okla., June 11, 1973. Interment at Rose Hill Cemetery, Oklahoma City, Okla. Allen Street was mayor of Oklahoma City from April 8, 1947 April 7, 1959.