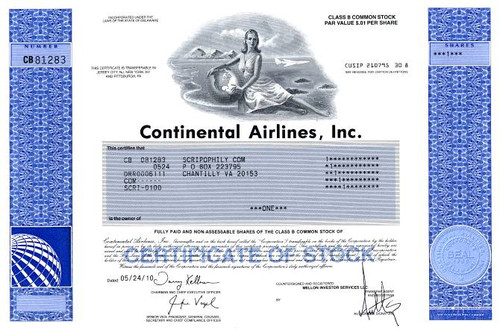 Beautifully engraved certificate from the Continental Airlines, Inc. This historic document was printed by the American Banknote Company and has an ornate border around it with a vignette of an allegorical woman leaning on a globe with a jet and islands in the background. This item has the printed signatures of the Company's Chairman and Chief Executive Officer, and the Senior Vice President, General Counsel, Secretary, and Chief Compliance Officer. 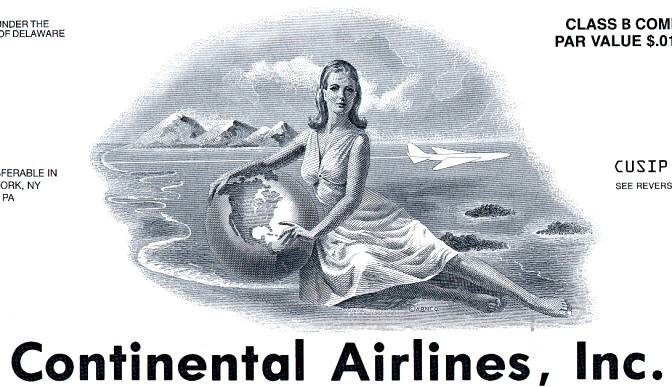 Certificate Vignette
Continental Airlines was the fifth-largest airline in the U.S., offering more than 2,100 departures daily to 122 domestic and 90 international destinations. Operating hubs in New York, Houston, Cleveland and Guam, Continental serves more international cities than any other U.S. carrier, including extensive service throughout the Americas, Europe and Asia. On Sunday, May 2, 2010, the Boards of Directors at Continental and United Airlines approved a stock-swap deal that would combine them into the world's largest airline in revenue passenger miles. The new airline will take on the United Airlines name, Continental's logo and be based in United's hometown of Chicago. The new United will be run by Continental's CEO, Jeffery Smisek, along with United Airline's CEO, Glenn Tilton, serving as non-executive Chairman of the board. The deal received approval from U.S. and European regulators in the summer of 2010. The shareholders of both airlines approved the deal on September 17, 2010. Effective October 1, 2010, Continental Airlines became a wholly-owned subsidiary of United Continental Holdings, Inc. following the close of the merger--a transaction estimated to be worth (USD)$3.2 billion. Companies are no longer required to provide paper certificates, and an increasing number are opting out of printing paper stock certificates. In addition, charges and fees designed to push investors toward electronic records are rising. Many brokers charge customers $500 or more to produce a paper certificate. That's because they're passing along a fee they're charged by the DTCC, which is using the fee to coax investors to go paperless. As a result, paper stock certificate are becoming much harder to obtain. History from Encyberpedia and OldCompany.com (old stock certificate research service)