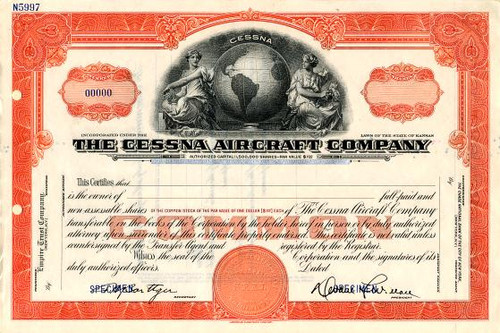 Beautiful RARE certificate from the Cessna Aircraft Company printed in the 1950's. This historic document was printed by American Banknote Company and has an ornate border around it with a vignette of two allegorical women next to a globe. This item has the printed signatures of the Company's President, Dwane Wallace and Secretary, F. A. Boettger and is over 53 years old. 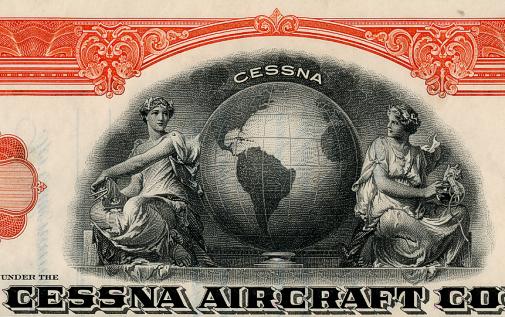 Certificate Vignette
Cessna Aircraft Company, headquartered in Wichita, Kansas, is a manufacturer of general aviation aircraft, primarily specializing in small, piston-powered aircraft and medium-sized business jets. The company traces its history to June 1911, when Clyde Cessna, a farmer in Rago, Kansas, built a wood-and-fabric plane and became the first person to build and fly an aircraft between the Mississippi River and the Rocky Mountains. Clyde Cessna started his aircraft ventures in Enid, Oklahoma testing many of his early planes on the salt flats. When bankers in Enid would not loan him the money to build his planes, he moved to Wichita. In 1924, Cessna partnered with Lloyd C. Stearman and Walter H. Beech to form the Travel Air Manufacturing Co., Inc., a biplane manufacturing firm, in Wichita. In 1927 he left Travel Air to form his own company, the "Cessna Aircraft Company", to build monoplanes. Cessna Aircraft Company closed its doors from 19321934 due to the state of the economy. In 1934, Dwane Wallace, with the help of his brother Dwight, took control of the company and began the process of building it into a global success. After World War II, Cessna created the 170, which, along with later models (notably the 172), became the most widely produced light aircraft in history. Cessna's advertising boasts that its aircraft have trained more pilots than those of any other company. Cessna was bought by General Dynamics Corporation in 1985, and it stopped producing piston-engine aircraft the next year due to concerns over product liability. In 1992, Textron Inc. bought Cessna and soon resumed producing light aircraft. Currently, Cessna produces 4 and 6 place single engine airplanes, utility turboprops, and business jets. History from Wikipedia and OldCompanyResearch.com (old stock certificate research service).