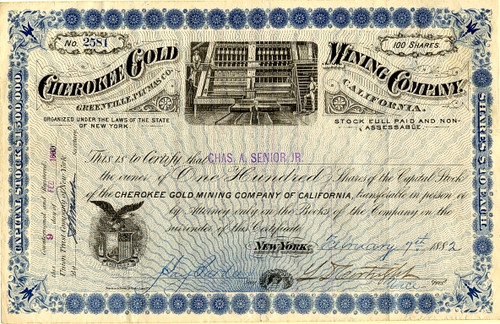 Beautiful certificate from the Cherokee Gold Mining Company issued in 1882. This historic document was printed by Dennison & Brown Company and has an ornate border around it with a vignette of two men next to a Stamp Mill with fourteen stamps. This item has the signatures of the Company's V. President and Secretary and is over 126 years old. 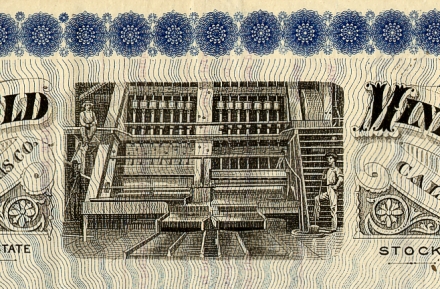 Certificate Vignette
The Cherokee Mine was located near the Round Valley Reservoir in Greenville, California. The Cherokee Gold Mining Company, was incorporated in New York circa 1881. Cherokee was an early discovery in Plumas County. After being owned and operated by several small companies, the New York company took over, and the mining operations were expanded. Much promotion went out about the greatness of the mine. Horatio Burchard, Director of the Mint, once wrote that the mine had "great values... from 4 ledges, 3 to 6 feet wide." The new company dropped a 200 foot shaft in early 1882, but closed the mine at the end of the year. Apparently, all of the quartz at the site was not ore grade, and Burchard later reported in 1885 that it was "a serious blow to the district." Numerous small high-grade pockets were mined intermittently through about 1900. At some point, the shaft was deepened to 400 feet deep with a few hundred feet of workings. George Standart was the superintendent of the Cherokee Gold Mining Company back in 1885. History from Plumas County, California Forum.