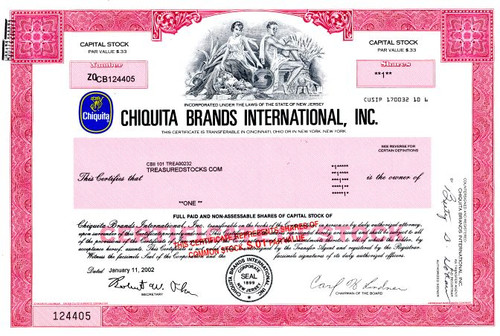 Beautifully engraved certificate from Chiquita Brands International, Inc. issued in 2002. This historic document was printed by the Security-Columbian United States Banknote Company and has an ornate border around it with a vignette of an allegorical man and woman sitting by the fruits of their labors above the company's name and logo. This item has the printed signatures of the Company's Chairman of the Board, Carl H. Lindner, Jr and Secretary, and is over 9 years old. 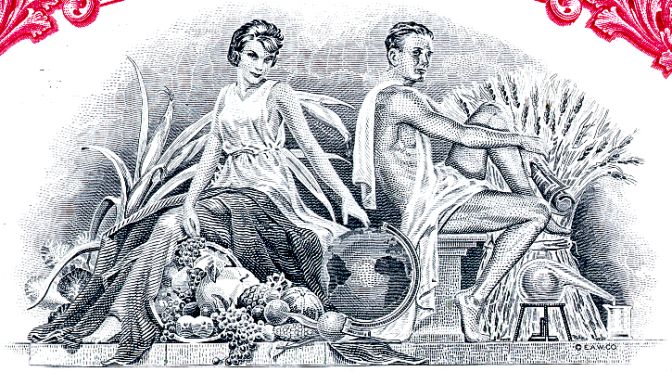 Certificate Vignette
Chiquita Brands International Inc. (NYSE: CQB) is a producer and distributor of bananas and other produce, under a variety of subsidiary brand names, collectively known as Chiquita. Other brands include Fresh Express salads, which it purchased from Performance Food Group in 2005. Its headquarters is located in Downtown Cincinnati, Ohio.[1] Chiquita is the successor to the United Fruit Company and is the leading distributor of bananas in the United States. The company also owns a German produce distribution company, Atlanta AG, which it acquired in 2003. Chiquita was formerly controlled by Cincinnati businessman Carl H. Lindner, Jr., whose majority ownership of the company ended as a result of Chiquita Brands International exiting a prepackaged Chapter 11 bankruptcy on March 19, 2002. The enterprise changed its name to Chiquita Brands and operates with that name to this day.