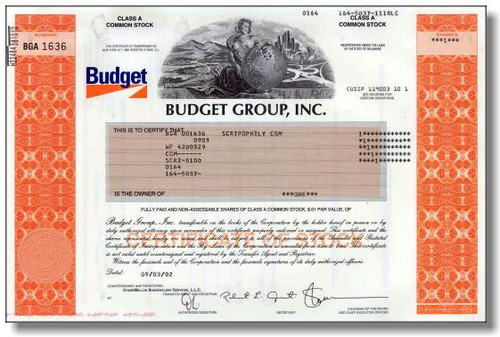 Beautifully engraved uncancelled stock certificate from Budget Group, Inc. issued in 2002. This historic document was printed by the American Banknote Company and has an ornate border around it with a vignette of the company logo and an allegorical woman leaning on a globe. This item has the printed signatures of the Company's Chairman of the Board and Chief Executive Officer, Sandy Miller and Secretary.

Certificate Vignette
Budget Group Seeks Bankruptcy Protection July 30, 2002 Budget Group Inc. filed for bankruptcy protection Monday as a slump in airport car rentals after the Sept. 11 attacks doomed an attempt to stem losses. Cendant Corp., the parent of rival Avis, reportedly was considering buying Budget through bankruptcy proceedings. Budget spokeswoman Kimberly Mulcahy said an announcement is expected soon. Daytona Beach, Fla.-based Budget, which gets about half its U.S. revenue from rentals at airport locations, listed $4.04 billion in assets and $4.33 billion in debts in Chapter 11 papers filed in U.S. Bankruptcy Court in Wilmington, Del. Airline passenger traffic, or miles flown by paying customers, remained as much as 14% lower at some major U.S. airlines in June compared with a year earlier. Traffic also had declined in 2001 because of a slowdown in business travel. Airline executives have said some travelers have switched to driving their cars or taking trains for shorter distances. "The impact of Sept. 11 and the continued recession in the travel sector" left the company with debts "greater than our operations can reasonably support," Budget Chief Executive Sandy Miller said. Budget became the second car rental company to file for Chapter 11 since November, when ANC Rental Corp., the parent of Alamo Rent-A-Car and National Car Rental, asked for bankruptcy protection. Class A shares of Budget, which reported $2.43 billion in fiscal 2000 sales and a $604.6-million loss, fell 2 cents, to 13 cents, in over-the-counter trading. Budget said it has obtained a $100-million line of credit to continue operations during the bankruptcy process and a $750-million loan to upgrade its rental fleet. New York-based Cendant, the world's largest hotel franchiser, declined to comment. Shares of Cendant rose $1.20 to $14.25 in New York Stock Exchange trading. Budget Rent a Car System, Inc. is an American car rental company that was founded in 1958 in Los Angeles, California by Morris Mirkin. Budget's operations are headquartered in Parsippany-Troy Hills, New Jersey. With its original fleet of 10 cars, the company lived up to the 'Budget' name by undercutting the daily and per mile rental rates of the established airport based car rental companies. Mirkin was joined in 1959 by Julius Lederer (husband of columnist Ann Landers) who built the company, and made it an international company. In 1960, the headquarters moved to Chicago, Illinois and the rental fleet expanded with franchised and wholly owned rental outlets. The company was eventually acquired by Transamerica Corporation, and then sold in 1986 in a leveraged buyout by Gibbons, Green and van Amerongen Ltd., along with management (led by CEO Clifton E. Haley) and selected investors. The company made its first public stock offering in 1987. Team Rental Group purchased the public company in 1997 and took the name Budget Group. In 2002, it sold the company's assets to Cendant Corporation, which also owned Avis and in September 2006, Cendant Corporation separated into four independent companies. The real estate division became Realogy, Inc., its hospitality services division became Wyndham Worldwide, and the travel distribution services division became Travelport, Inc., an affiliate of The Blackstone Group. In 2006, following the Travelport sale, Cendant, now composed solely of its vehicle rental services businesses, renamed itself Avis Budget Group. Of the approximately 800 Budget Rental Car locations in the U.S., 600 are company-operated locations and 200 are licensee locations. Internationally, there are 150 company-operated locations and 1,800 licensees. Parsippany, NJ Sep 5, 2006 - Avis Budget Group, Inc. (NYSE: CAR) announced that it will begin trading today on the New York Stock Exchange under the symbol "CAR" after giving effect to a one-for-ten reverse stock split. Avis Budget Group was formerly known as Cendant Corporation (NYSE: CD). NEW YORK and LISLE, Ill., Aug. 22, 2002 /PRNewswire-FirstCall/ -- Cendant Corporation (NYSE: CD) today announced that it has entered into a definitive agreement to acquire substantially all of the assets of Budget Group, Inc. (OTC Bulletin Board: BDGPA) for $107.5 million in cash plus the payment of certain transaction related expenses and assumption of certain contracts and trade payables. In addition, a subsidiary of Cendant will assume approximately $2.7 billion in non-recourse asset-backed vehicle-related debt. Budget Group is the third-largest general use car and truck rental company in the United States. Budget Group, Inc. is one of the world's leading vehicle rental companies with 2000 revenues of $2.4 billion, and subsidiary companies that have some of the largest and most recognized brand names in the world: Budget Rent a Car and Ryder TRS. Through the synergies of car and truck rental, airport and neighborhood locations, and business and leisure travel expertise, Budget Group is able to meet the diverse needs of its customers. Budget Rent a Car Corporation is one of the world's top three car and truck rental systems with a global presence of over 3,200 locations in over 120 countries and territories. The company was founded in 1958 as a car rental company for the "budget-minded" personal renter. Since then, it has helped define the car rental industry through precedent-setting products and services. Ryder TRS, Inc. is the nation's second largest consumer truck rental company with a network of over 3,200 dealer locations. As a leading consumer and light commercial truck rental business, Ryder TRS has offered local and long distance ("one-way") moving services since 1942. Budget Group, Inc. focuses on building strong community relationships with the many cities in which we operate. If you're interested in learning more about our community involvement, visit our corporate contributions center. Company Background Originally named Team Rental Group, Inc. and traded on the NASDAQ, it was Budget Rent a Car Corporation's largest U.S. licensee. It was renamed Budget Group, Inc. in 1997 when it moved to the NYSE and acquired Budget Rent a Car Corporation from Ford Motor Company. In 1998, Budget Group acquired Ryder TRS, Inc.