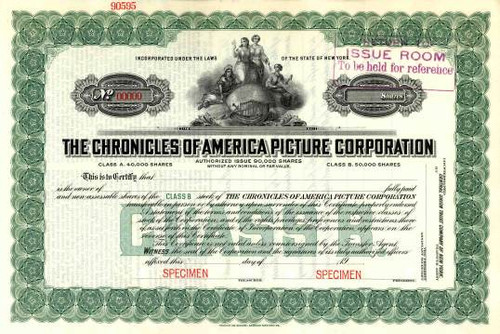 Beautifully engraved RARE SPECIMEN certificate from the Chronicles of America Picture Corporation. This historic document was printed by the American Banknote Company and has an ornate border around it with a vignette of allegorical women. 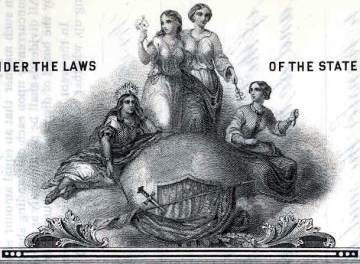 Certificate Vignette
In 1923 the Yale University Press commissioned films based on the fifty volumes in their Chronicles of America series. Ultimately, only fifteen episodes were produced. The Pilgrims traces their escape, first to Holland and then their departure on the Mayflower for America. The hardships of the settlers are shown in a manner which, according to the subject guide, "reveals the simple faith of the Pilgrims and their devotion to the ideal of freedom of religious thought and expression." In like manner, The Puritans "examines the capable leadership of Governor Winthrop who struggled to maintain the Massachusetts Bay Colony's charter in the face of religious dissension from within and political attacks from across the sea." In The Pilgrim, Charlie Chaplin's plays an escaped convict mistaken for a minister. The Chronicles of America: The Pilgrims (Chronicles of America Picture Corp., 1924). Director: Edwin L. Hollywood. Writer: William B. Courtney. Cast: Robert Gaillard, Harry Simpson, John Hopkins, Charlie Chaplin. (30 min., si., b&w, 35mm; LC Collection). The Chronicles of America: The Puritans (Chronicles of America Picture Corp., 1924). Director: Frank Tuttle. Writer: Evangeline Andrews. Cast: Arthur Hohl, Audrey Hart. (30 min., si., b&w, 35mm; LC Collection). The Pilgrim (First National, 1923). Director/Writer: Charles Chaplin. Photography: Rollie Totheroh. Cast: Charles Chaplin, Edna Purviance, Mack Swain, Kitty Bradbury, Marion Davies. (41 min., si., b&w, laserdisc; LC Collection). About Specimens Specimen Certificates are actual certificates that have never been issued. They were usually kept by the printers in their permanent archives as their only example of a particular certificate. Sometimes you will see a hand stamp on the certificate that says "Do not remove from file". Specimens were also used to show prospective clients different types of certificate designs that were available. Specimen certificates are usually much scarcer than issued certificates. In fact, many times they are the only way to get a certificate for a particular company because the issued certificates were redeemed and destroyed. In a few instances, Specimen certificates we made for a company but were never used because a different design was chosen by the company. These certificates are normally stamped "Specimen" or they have small holes spelling the word specimen. Most of the time they don't have a serial number, or they have a serial number of 00000. This is an exciting sector of the hobby that grown in popularity and realized nice appreciation in value over the past several years.