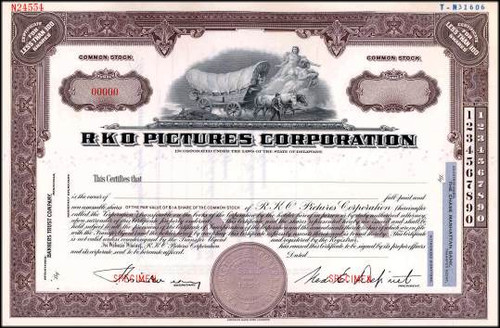 Beautifully engraved RARE SPECIMEN certificate from the RKO Pictures Corporation. This historic document was printed by the American Banknote Company and has an ornate border around it with a vignette of a Conestoga wagon with angelic figures leading the horses. This item has the printed signatures of the Company's President ( Ned Depinet ).

Certificate Vignette
Originating in a Milwaukee nickelodeon in 1909 a small company grew and combined with other businesses eventuating in the Mutual Film Corporation prior to Word War I. Through a series of other business acquisitions and diverse compilations Radio-Keith-Orpheum emerged in 1928. Their holdings and ventures included production, distribution and artistic presentations. By 1933 the corporation closed but many of its auxiliaries survived. In 1948, Howard Hughes purchased 929,000 shares of RKO stock and took control of the company. In 1952, Howard Hughes sold RKO Pictures, Inc., now a separate entity entirely from the RKO Theaters, Corp., to General Teleradio, Inc., a subsidiary of General Tire and Rubber, thus creating RKO Teleradio, Inc. Then, RKO was sold to Desilu Productions for television production of "I Love Lucy". By the late 1980s Pavilion Communications owned most of what remained of RKO and many of the property rights had already been purchased by Ted Turner. During the 30s and 40s RKO hit its zenith with productions including Fred Astaire-Ginger Rogers musicals, high quality horror shows, comedies with Katherine Hepburn and Cary Grant and the stellar productions of Welles' "Citizen Kane" and Hitchcock's "Suspicion." About Specimens Specimen Certificates are actual certificates that have never been issued. They were usually kept by the printers in their permanent archives as their only example of a particular certificate. Sometimes you will see a hand stamp on the certificate that says "Do not remove from file". Specimens were also used to show prospective clients different types of certificate designs that were available. Specimen certificates are usually much scarcer than issued certificates. In fact, many times they are the only way to get a certificate for a particular company because the issued certificates were redeemed and destroyed. In a few instances, Specimen certificates we made for a company but were never used because a different design was chosen by the company. These certificates are normally stamped "Specimen" or they have small holes spelling the word specimen. Most of the time they don't have a serial number, or they have a serial number of 00000. This is an exciting sector of the hobby that grown in popularity and realized nice appreciation in value over the past several years.