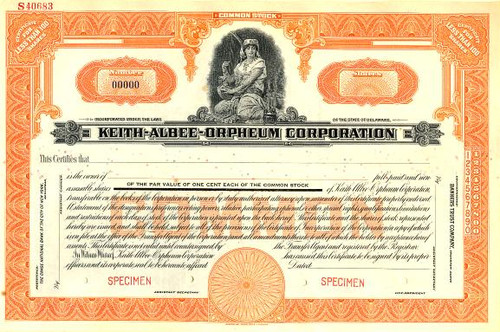 Beautifully engraved RARE specimen certificate from Keith-Albee-Orpheum Corporation printed in the 1920's. This historic document was printed by American Bank Note Company and has an ornate border around it with a vignette of a woman playing a harp. This item is over 78 years old. 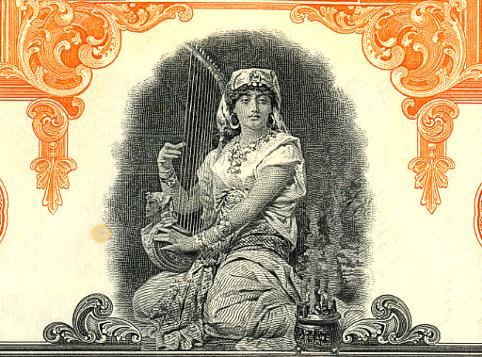 Certificate Vignette
Benjamin Franklin Keith and Edward Franklin Albee became partners in the late 1880s to promote "polite" vaudeville. They lavishly remodeled several theaters on the east coast and began producing a brand of "high class" vaudeville. Crude remarks and risquÃ© costumes were censored from performances and they even attempted to prohibit rude behaviour by audiences. Keith was the financial head of the circuit, while Albee was the general manager and owner of several theaters. In 1906, Keith and Albee established the United Booking Office. Every act that sought employment at any of the member theaters had to work through this central office, which in turn charged a five percent commission per act. Thus Keith and Albee expanded their power base. In the 1920s the Keith/Albee circuit merged with a western chain of vaudeville theaters to form the Keith-Albee-Orpheum Corporation (KAO Theater Chain). Keith-Albee-Orpheum Corporation was incorporated in Delaware on Jan. 28, 1928 to acquire the capital stocks of the B. F. Keith Corp. Orpheum Circuit, Inc., Vaudeville Collection Agency, B. F. Keith-Albee Vaudeville Exchange and Greater New York Corp., Theatres Corp. The company, through its subsidiaries, operated a chain of vaudeville and moving picture theatres throughout the United States and Canada with, an aggregate seating capacity in excess of 1,050,000 persons. Number of employees, on Feb. 19, 1929 was approximately 5,100. In 1928, $4,500,000 worth of stock was sold to Joseph P. Kennedy's Radio Corporation of America (RCA) establishing the Radio-Keith-Orpheum (RKO). After this merger, motion pictures became the primary form of entertainment, while vaudeville survived only as an accompaniment to the feature film. The new RKO Corporation branched out and starting making movies to show in its huge string of theaters. RKO began calling its cinematic creations "Radio Pictures" in the hopes of garnering positive marketing appeal by positioning itself next to the hottest communication technology of the time. The company was very successful in the movie business and is most notably remembered for the Orson Welles classic, Citizen Kane, Frank Capra's It's A Wonderful Life, The Hunchback of Notre Dame, and many more remarkable films. The eccentric billionaire, Howard Hughes, purchased RKO in 1948. He proceeded to screw it up for several years until he sold it for $25 million dollars in the early 1950s. About Specimens Specimen Certificates are actual certificates that have never been issued. They were usually kept by the printers in their permanent archives as their only example of a particular certificate. Sometimes you will see a hand stamp on the certificate that says "Do not remove from file". Specimens were also used to show prospective clients different types of certificate designs that were available. Specimen certificates are usually much scarcer than issued certificates. In fact, many times they are the only way to get a certificate for a particular company because the issued certificates were redeemed and destroyed. In a few instances, Specimen certificates we made for a company but were never used because a different design was chosen by the company. These certificates are normally stamped "Specimen" or they have small holes spelling the word specimen. Most of the time they don't have a serial number, or they have a serial number of 00000. This is an exciting sector of the hobby that grown in popularity over the past several years.