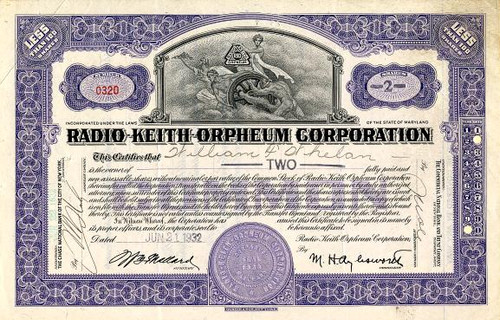 Beautiful RARE uncancelled certificate from the Radio-Keith Orpheum Corporation issued in 1932. This historic document was printed by Quayle & Son and has an ornate border around it with a vignette of a group of allegorical figues flying though clouds with the company's logo in the center. This item has the printed signatures of the Company's President and Secretary and is over 75 years old. 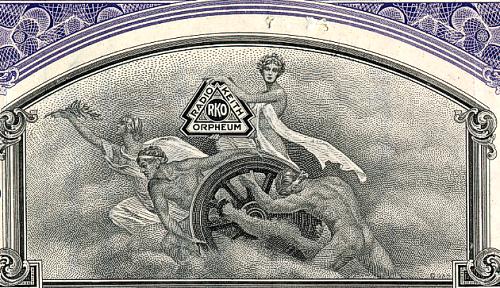 Certificate Vignette
Radio-Keith Orpheum Corporation was incorporated in Delaware on January 28, 1928, to acquire the stocks of the B.F. Keith Corporation; Orpheum Circuit, Inc.; Vaudeville Collection Agency; B.F. Keith-Albee Vaudeville Exchange; and Greater New York Corporation. The company operated a chain of vaudeville and motion picture theatres in the United States and Canada with a seating capacity of 1,050,000 persons. In May 1928, a controlling portion of stock was sold to Joseph P. Kennedy, from whom it was purchased in October by the Radio Corporation of America (RCA) as part of the deal that created the major motion picture studio Radio-Keith-Orpheum (RKO). After the establishment of RKO, motion pictures became the primary focus of entertainment at the former KAO theaters. Vaudeville survived only as an interlude for the feature film. Benjamin Franklin Keith and Edward Franklin Albee became partners in the late 1880s to promote "polite" vaudeville. They lavishly remodeled several theaters on the east coast and began producing a brand of "high class" vaudeville. Crude remarks and risquÃ© costumes were censored from performances and they even attempted to prohibit rude behaviour by audiences. Keith was the financial head of the circuit, while Albee was the general manager and owner of several theaters. In 1906, Keith and Albee established the United Booking Office. Every act that sought employment at any of the member theaters had to work through this central office, which in turn charged a five percent commission per act. Thus Keith and Albee expanded their power base. In the 1920s the Keith/Albee circuit merged with a western chain of vaudeville theaters to form the Keith-Albee-Orpheum Corporation (KAO Theater Chain). The eccentric billionaire, Howard Hughes, purchased RKO in 1948. He proceeded to screw it up for several years until he sold it for $25 million dollars in the early 1950s.