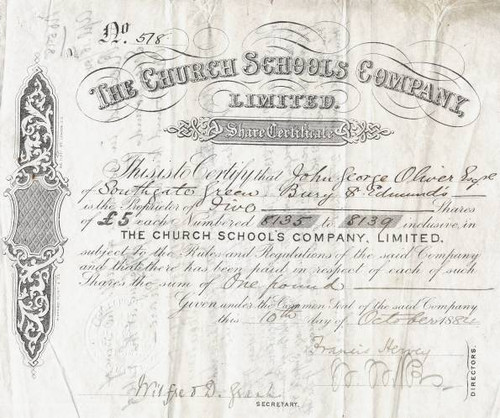 Beautiful certificate from the Church Schools Company Limited issued in 1884. This historic document was printed by Richard Flint & Co. This item has been hand signed by the Company's Directors, and Secretary, and is over 127 years old. The official year-book of the Church of England - 1897 The Church Schools Company dates its legal existence from July 1883, and was inaugurated at a public meeting in Willis's Rooms, with the Archbishop of Canterbury in the chair, who warmly commended the movement on the following lines: That the object should be to establish for boys and girls above the class attending elementary schools, schools of various grades, providing at a moderate cost a thoroughly efficient education in accordance with the principles of the Church of England, the right of withdrawing a scholar in the day schools from religious instruction being reserved to the parent or guardian. That, where practicable, local committees should be formed to support and assist the Central Council in the management of each, school. That the school* should be examined from time to time both in religious and secular knowledge by representatives of the Universities, or of King's College, London, or by other competent persons appointed by the Council. The Company commenced active work in the establishment of schools at the beginning of January 1884, when the first school was opened under its auspices at Surbiton, for girls. There are now 29 schools in operation. Altogether the number of pupils receiving education under the Company's management is now between "2,000 and 3,000. Over twelve thousand nine hundred shares have been taken, representing more than half the nominal capital of 100,000/. It is a principle of the Company not to undertake the establishment of a school unless a certain proportion of the capital required is subscribed in the locality interested. The number of appeals which have been received from different pails of the country for the establishment of such schools would seem to denote a real want, and to justify the new effort to assist in meeting it. The following is a table showing the number of schools which are being carried on by the Company: Bournemouth, Ellerslie, Hinton Road Brighton, 56 Old Steine . 1 Brockley ..... Bury St. Edmunds, Northgate Street Derby, Osmastou Koad . 2Dewsbury, Eightlands House. - Durham, 3 South Bailey Gloucester, College Green Guildford, London Koad . a Hull, Park Street .... - Kendal, Ellerbank Kensington Park, 21 Colville Square, North Ken- sington ..... 3 Leicester, Beausite 2Neweastle-on-Tvne, Tankerville Terrace -Northampton, ClevedonSchool Heading, Blenheim House J Heigate, Somers Road . - Richmond (Surrey), Church Road . -St. Albans, Holywell Hill . Streatham, High Road - Stroud Green, Albany Koad . 1 Sunderland, Bede Tower Sunderland, Mowbray Koad . - Surbiton, Surbiton Park Crescent . Wigan, 19 New Market Street 1 Woolwich, Plumstead Common Road 2 Woolwich, Cambridge Place . Great Yarmouth, Albert House York, Minster Yard Address: The Secretary, Church House, Dean's Yard, Westminster, S.W. Stock research by OldCompany.com (old stock certificate research service).