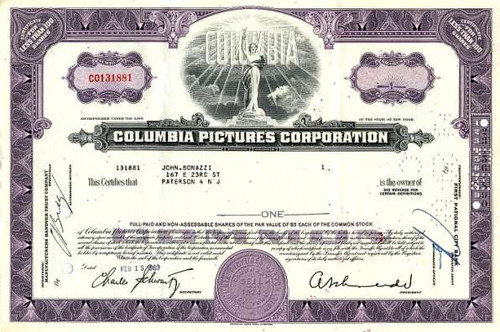 Beautifully engraved certificate from the Columbia Pictures Corporation issued no later than 1965. This historic document was printed by the American Banknote Company and has an ornate border around it with a vignette of an allegoric woman holding a torch up in her left hand. This item has the printed signatures of the company's president and secretary and is over 47 years old. 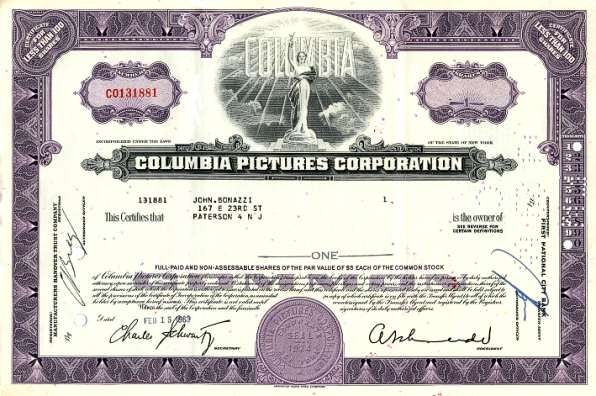 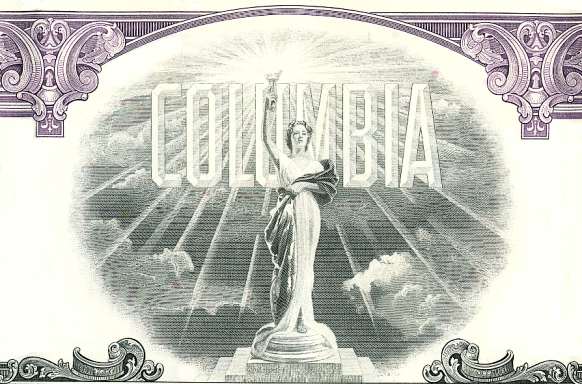 Certificate Vignette
Currently owned by the multinational Sony Corporation, Columbia Pictures began on Hollywood's Poverty Row, an area housing small production companies that churned out low budget westerns and B pictures. Until his death in 1959, the studio was headed by the indomitable Harry Cohn, who prided himself on producing films quickly and cheaply. In the late 1920s, Columbia began a remarkable collaboration with director Frank Capra, who would make twenty-six films for the studio, among them some of Columbia's most prestigious productions. It was Capra who directed the studio's first all-talking picture THE DONAVAN AFFAIR and who won the studio's first Oscar--for the comedy IT HAPPENED ONE NIGHT. Throughout its history, Columbia produced films that reflected the social concerns of the day, beginning with Capra's 1932 interracial love story, THE BITTER TEA OF GENERAL YEN. Among the other films included in the UCLA Film and Television Archive's collection are BLIND ALLEY (1932), ALL THE KING'S MEN (1949), THE CAINE MUTINY (1954), PORGY AND BESS (1959), ON THE WATERFRONT (1954), THE BRIDGE ON THE RIVER KWAI (1957), ALL THE YOUNG MEN (1960), GUESS WHO'S COMING TO DINNER (1967), FIVE EASY PIECES (1970), THE LAST DETAIL (1974) and THE BIG CHILL (1983). History from the Old Stock Detective.