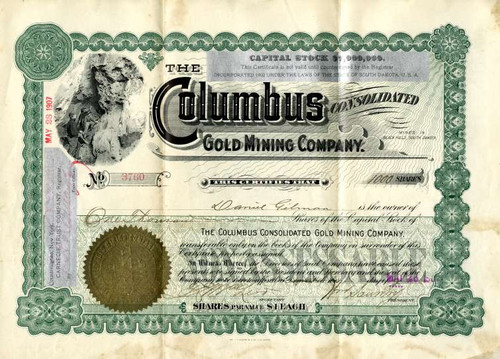 Beautifully engraved certificate from the Columbus Consolidated Gold Mining Company issued in 1907. This historic document was printed by the C. F, Hoeckel Company, Denver and has an ornate border around it with a vignette miners working on a ledge. This item has the signatures of the Company's President, William Sauntry, and Secretary. Some toning on borders. 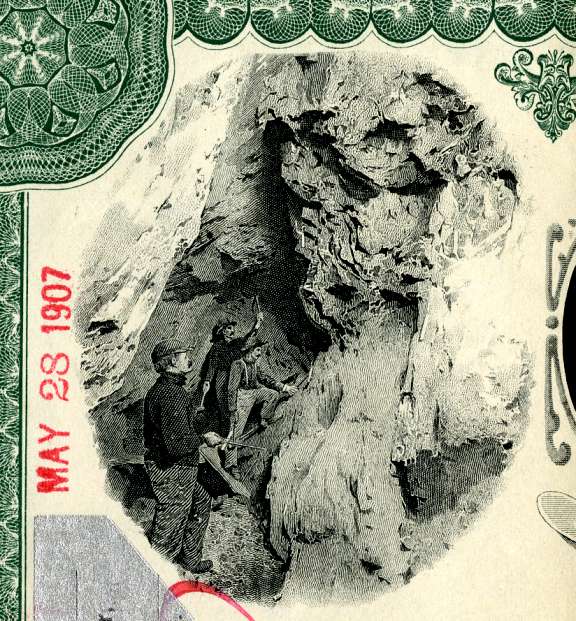 Certificate Vignette
In 1905, the vice-president, William Sauntry, of Stillwater, Minnesota, had taken over the control of the Columbus Consolidated Gold Mining Company. William Sauntry was a lumber-baron whose life was a rags-to-riches story. William Sauntry was a first cousin of entertainer Bing Crosby. The Columbus Consolidated Gold Mining Company had a capitalization of $7,000,000, the shares having a par value of one dollar each. The company was organized under the laws of the state of South Dakota. Their general offices were established at 13-14 Brown Palace building, Denver, Colorado and their mine office was located at the the Franklin Hotel in Deadwood, South Dakota. The Columbus Consolidated Gold Mining Company was organized in 1902. It owned 625 acres north of the Homestake mining properties and extended northward nearly a mile along the strike of the Homestake system of ore veins. The property included the old Colonel shaft on Saw Pit Gulch, which was 200 feet deep, with a 10-stamp mill in connection. This property was being reconstructed and already was being operated. The company bought the 20-stamp crushing cyanide mill built at Gayville many years before by the Baltimore Deadwood company and operated by the Portland company under lease for the past two years. In 1902 the company was operating on siliceous ore from the Rossiter and Dalton groups of claims on Sheep Tail and Black Tail Gulches. On one of the claims was a series of siliceous ore chutes overlying the vertical slates and was situated so as to be mined at light cost. Underneath was a permanent ore supply, however. A number of strong fissure veins of free milling ore which was being developed by the Columbus shaft were there. History from Encyberpedia, History of Dakota Territory, Volume 3 and OldCompany.com (old stock certificate research service)