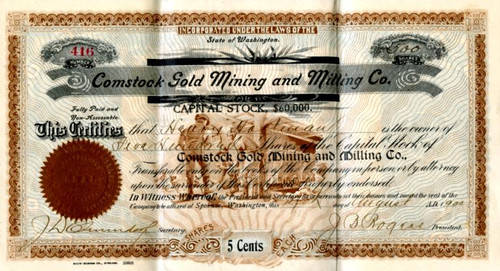 Beautifully engraved certificate from the Comstock Gold Mining and Milling Co. issued in 1900. This historic document has an ornate border around it with a vignette of the company's name and an underprint of a mining scene. This item has the signatures of the Company's President, J. B. Rogers and Secretary, J. D. Elendorf and is over 113 years old.

Certificate Vignette
THE SUMPTER MINER PROFESSIONAL NEWS - 1900 ON COMSTOCK MINES Property Near the Red Boy Being; Developed Two shifts of minors aro busily en gaged in extending tho crosscut tunnel into the hill whereon is located the mineral veins of the Comstock Gold Mining and Milling company, situated northeast of the Red Boy and adjoing the Blue Bird. This company is a Spokane concern, it is incorporated for 100,000 with shares at only flvo cents each. Tho present contract is for 200 feet, fifty of which has been completed. At present this tunnel is 5-10 feet in length, two lends have been iHsnetrated and the bore is being extended so as to cut another known to bo some distance ahead. The rock is very hard, there fore progress is quite slow with hand drills. The first vein encountered was cut at a depth of ISO feet from the surface and the second one 175 feet in depth. They are about 400 feet apart. The first averages ten feet in with and is of satisfactory grade, the second vein is twenty feet wido and like the first, carries pay values, both containing free gold. These lodes aro described as carrying porpheticquartc, said to be a splended indication for permanency in that section. No drifting has been done on either of them, the company desiring to push the tunnel ahead and open up the other vein before mora thoroughly ex ploring that which they already have in sight. There are four claims in the group, the Poor Boy, Mineral Chief and two others, whoso names aro not at hand. On the surface a considerable quantity of work has been done in tho way of open cuts, sinking pits etc, which prove the continuity of the lodes and justi ing the present development work. THE MOKNING OBEGONIAN, THURSDAY, FEBRUARY 7, 1901 A big crosscut tunnel is being driven on the property of the Comstock Milling & Mining Company, located about a quar ter of a mile from the Red Boy. J. B. Rogers is president of this concern, J. D. Elendorf secretary, and P. B. McGerry has charge of the work. Two shifts are employed in the face of the tunnel. The crosscut Is now in 375 feet, with a depth of 225 feet from the surface. Four claims are In the group, the Poor Boy. Mineral Chief, Myrtle and Clear Grit. Three veins are revealed on the surface, with a strike of northeast by southwest. The owners also believe that they have the easterly extension of the Monarch, Red Boy and Blaine veins. Surface work reveals what Is supposed to be the Monarch as having a width of four feet, the Red Boy 20 inches, and the Blaine three feet. Mr. McGerry estimates that the breast of his crosscut Is now within 50 feet of the first vein, and the calculation is corroborated by the highly mineralized character of the rock being removed, and the stratified formation indicated by the occasional stringers encountered. No work is being done on the May Queen, where a 10-stamp mill has been erected. History from Encyberpedia and OldCompany.com (old stock certificate research service)