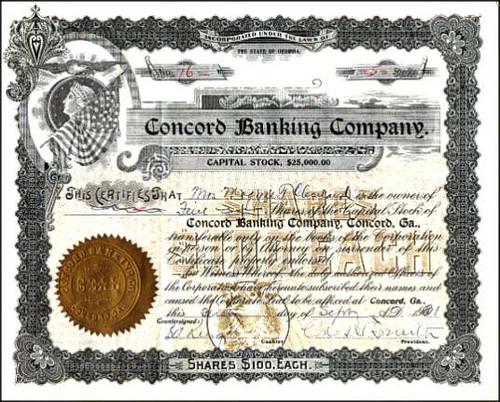 Beautifully engraved certificate from the Concord Banking Company issued no later than 1907. This historic document was printed by Levey Bros & Co. Lithographers and has an ornate border around it with a vignette of a Silver Dollar and an American Flag. This item has the hand signatures of the Company's President, Charles T. Smith and its Cashier, B. A. King. 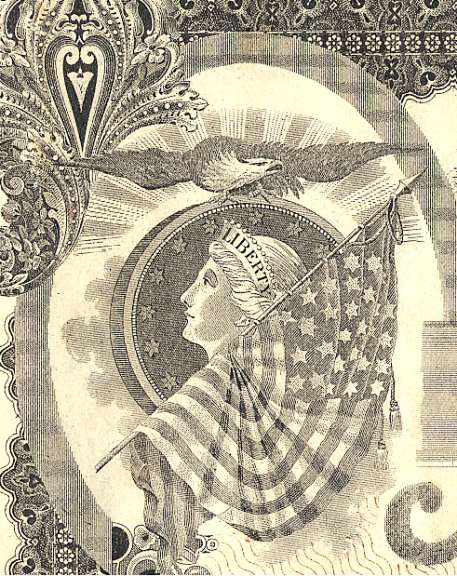 Certificate Vignette
Charles T. Smith of Concord, Georgia was one of the original founders of the Southern Nursery Association in 1899 when a group of nine men gathered at the American Association of Nurserymen (AAN) Convention in Chicago and decided to organize a southern association for the explicit purpose of dealing with a serious freight issue. A committee was appointed to draft a constitution and by-laws and a second meeting was held on the first Wednesday in August, 1899, in Chattanooga, Tennessee. About 50 nurserymen attended this meeting. It was apparent that there were two serious problems that threatened the very survival of the nursery business in the south. The first, of course, was the problem of unfavorable freight rates on shipments to the northern and midwestern markets. And the second was the lack of cooperation between various states and their inspection services and the fact that various states had different tag requirements and license fees. There was no reciprocity between states or regions. Thus, the Southern Nurserymen's Association was born out of a common concern for survival. Since its inception, SNA has provided wholesale growers, brokers, retailers, landscape architects, landscape contractors, grounds maintenance contractors, interiorscapers and allied suppliers with the educational, marketing and networking opportunities essential to the survival of the horticultural industry. C. T. Smith was also the president of the Smith Brothers Nursery which specialized in the production of magnolia trees.