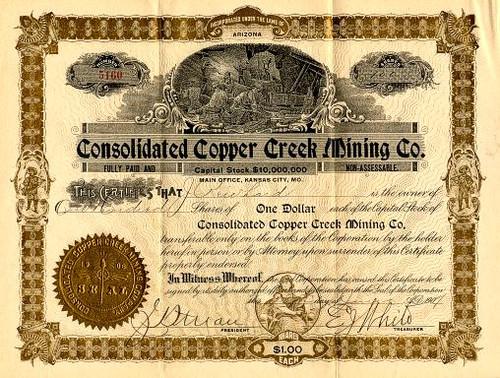 Beautifully engraved certificate from the Consolidated Copper Creek Mining Co. issued in 1910. This historic document has an ornate border around it with a vignette of several miners working underground. Gold border, seal and safety print. This item is hand signed by the Company's President and Assistant Treasurer and is over 96 years old.

Certificate Vignette
According to the Copper Handbook, 1910, p.640-41 the company owned the Sunset group of claims near Mayer. The property adjoined the Rosalie Copper Co. The company also controlled the Cons. Copper Co of Colorado which owned the Delmonico gold mine at Cripple Creek. Avertising, largely in the cheap mail order monthlies, was of the brazenly fakish sort, calculated to catch the dollars of the ignorant. Advertised, 1907, that it was altogether likely to become as famous as Amalgamated. The Arizona property is idle, and the Delmonico (Colorado) mine, which is apparently of some promise, is under honest management, was leased to, 1910, to J. McGinnis & Co. Frank H. Horn, apparently a promoter, is now in jail for fraudulent mining stock deals. Company is in bad shape financially, and is regarded with suspicion."