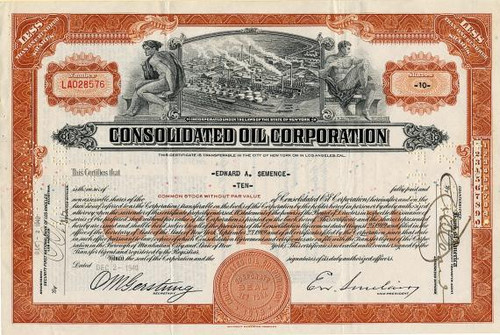 Beautiful certificate from the Consolidated Oil Corporation issued no later than 1941. This historic document was printed by the Security Banknote Company in 1935 and has an ornate border around it with a vignette of an oil refining plant between an allegorical man and woman. This item has the printed signatures of the Company's Vice President, E. Sinclair and Secretary, O. M. Gersting and is over 76 years old.

Certificate Vignette
Sinclair Oil & Gas Company -- Company History The Sinclair Oil & Refining Corporation was established on May 1, 1916, with headquarters in New York City. In September 1919 Harry Sinclair created the Sinclair Consolidated Oil Corporation as a holding company for twenty-eight operating subsidiaries that he had assembled. In just three years the company had acquired a variety of assets, such as over 4,000 tank cars, 11,000 acres of coal land in Illinois, 10 refineries, 5 ocean-going tank ships, and concessions to thousands of acres of land in Costa Rica, Mexico, and Panama for drilling oil. The 1920s were a defining time for Sinclair Oil. The automobile boom of this decade caused such competition in the petroleum industry that gasoline prices were steadily eroded. At retail, the pre-tax price per gallon shrank from twenty-five cents in 1918 to sixteen cents in 1930. Many blue chip oil companies closed as a result. Sinclair survived this period and in time leapt ahead of most competitors in the industry, in part through marketing. For example, the company created the modern service station, which opened in Chicago in 1922, offering oil change, greasing, tire repairs, wash jobs, free air, minor mechanical repairs, and a profitable sideline in tires, batteries, and accessories. The Sinclair super-stations even installed rest rooms. Sinclair also invested heavily in refining to cut costs. They installed stills, which "cracked" gas oil to yield double the amount of gasoline. Sinclair's refining capacity jumped from 45,000 barrels per day in 1920 to 100,000 barrels in 1926 to 150,000 barrels in 1932. The cost for refinery construction in this expansion was more than $87 million. Harry Sinclair and Sinclair Oil became involved in the Teapot Dome scandal that occurred during the Harding Administration in the 1920s. Harry Sinclair subsequently spent six months in the Washington D.C. House of Detention for contempt of the U.S. Senate. Sinclair expanded during the Depression years of 1930 through 1936 in part by acquiring companies either in receivership or in bankruptcy. One such company was Producers & Refiners Corporation, an 8,000-barrel refinery based in Parco, Wyoming. Sinclair grew spectacularly between 1916 and 1936. Net sales for the company were $3 million in 1916. In 1936 they were $62.2 million. Net worth grew as well. In 1916 it was $36 million, but by 1936 it had grown to $259.6 million. Sinclair annexed the assets of the Prairie pipeline and producing companies in 1932 for stock valued at $136 million. This gave Sinclair the largest pipeline in America. Several months later, Sinclair, in another exchange of stock, acquired the Rio Grande Oil Company, which produced crude oil and marketed in California. During these years the company changed names to Consolidated Oil Corporation, and in 1943 it assumed the name Sinclair Oil Corporation. Sinclair aggressively closed unprofitable service outlets during World War II. By mid-1943 the total number of company-owned and leased service stations shrank from 10,000 to 6,500. But government regulation ended price wars and stabilized costs, while promotional expenses were negligible. As a result, net earnings averaged $21 million during the war years, a record at that time. In 1948 net sales for all products at Sinclair topped $100 million and net worth rose to $412 million. In 1952 Sinclair organized Sinclair Petrochemicals, which quickly became the fastest-growing subsidiary, with an annual growth rate of 15 to 20 percent by 1956. By 1956, on the basis of assets totaling $1.64 billion, Sinclair was the twenty-second largest company in the United States. They placed forty-sixth in terms of sales with $1.19 billion. History from Wikipedia and OldCompanyResearch.com.