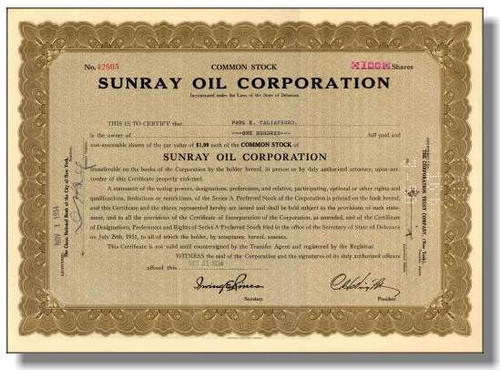 Engraved early certificate from the Sunray Oil Corporation issued in 1934. This historic document was printed by the American Banknote Company and has an ornate border around it. This item has the printed signatures of the Company's President (C. H. Wright) and Secretary (Irving E. Rines) and is over 72 years old. The certificate was issued to Paul E. Taliaferro who was Vice-President and General Attorney for the company. This share was issued in 1934 when the company reorganized and changed the par value of their common stock from $5 to $1. In 1955, the company merged with the Mid-Continent Oil Company and became the Sunray Mid-Continent Oil Company. In 1962, the company changed its name to the Sunray DX Oil Company. On October 25, 1968 Sunray (DX) Oil Company merged into the Sun Oil Company. In 1976, the Sun Oil Company reorganized and renamed itself the Sun Company Inc.