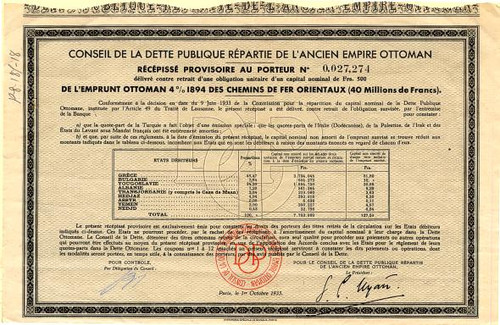 Beautiful certificate from the Conseil De La Dette Publique RÃ©partie De L'ancien Empire Ottoman issued in 1933. This historic document was printed by Imprimerie Speciale De Banque and has an ornate border around it with their name on top. This item has the signatures of the Company's Officials and is over 73 years old. 11 coupons attached on bottom. 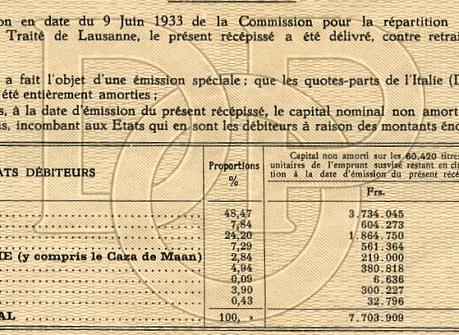 Certificate Vignette
The Ottoman Empire (Ottoman Turkish: دولتِ عَليه عُثمانيه, Devlet-i Aliye-i Osmaniye, literally "Ottoman Sublime State") was an imperial power, bordering the Mediterranean Sea, that existed from 1299 to 1922. At the height of its power in the 16th century, it included Anatolia, the Middle East, parts of North Africa, and much of south-eastern Europe to the Caucasus. It comprised an area of about 5.6 million km² [1], though it controlled a much larger area through indirect rule in adjoining areas dominated mainly by nomadic tribes. The Empire was situated in the Middle East and West, and interacted with both the East and the West throughout its six-century history . The Ottoman Empire was established by the tribe of Kinsik Oghuz Turks, in western Anatolia and was ruled by the Osmanlı dynasty, the descendants of those Turks. The Empire was founded by Osman I (in Arabic ʿUthmān, عُثمَان, hence the name Ottoman Empire). In 1453, following its capture from the Byzantine Empire, Constantinople, modern İstanbul, became the new capital of the Ottoman Empire under the name 'Kostantiniye'. In the 16th and 17th centuries, the Ottoman Empire was among the world's most powerful political entities, with the powers of eastern Europe constantly threatened by its steady advance through the Balkans and the southern part of the Polish-Lithuanian Commonwealth. Its navy was a powerful force in the Mediterranean. On several occasions it even invaded central Europe, sieging Vienna, in its attempts to conquer the Habsburg domain, and was only repulsed by coalitions of European powers. At its highest point, the Empire contained many important places of classical antiquity, including Homer's Olympus and Dardenus, Zeus' Europa, Io's Bosporus, temple of Diana in Ephesus, sarcophagus of Alexander the Great, Abraham's oasis and wells, the Nile River, the Mount of the Sermon, and the Hill of Golgotha. The dissolution of the Ottoman Empire was a consequence of World War I when Allied forces, including the Arabs, eventually defeated Ottoman forces in the Middle East. At the end of the war the Ottoman government collapsed and the empire was divided among the victorious powers. Subsequent years saw the declaration of new states from the remnants of the Ottoman Empire, one of which was the Republic of Turkey. The members of the Ottoman dynasty were banned from the lands of Anatolia, where they once built one of the great empires of the world. In 1999, after 76 years, Turkey's parliament granted Turkish citizenship to the descendants of the Ottoman family.