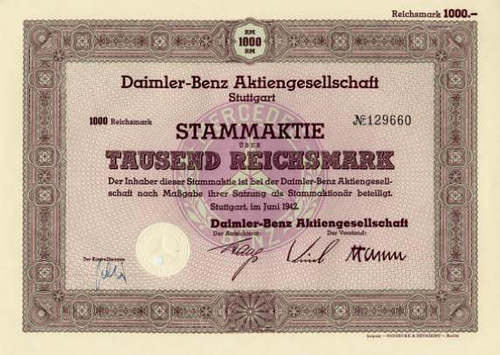 Beautifully engraved certificate from the Daimler - Benz Aktiengesellschaft issued in 1942. This historic document was printed by Giesecke & Devrient and has an ornate border around it. This item has the printed signatures of the Company's officers and is over 63 years old. 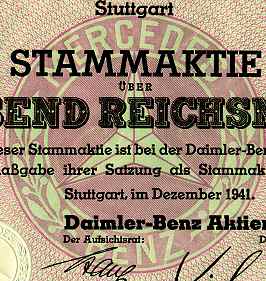 Logo Underprint
The History of Mercedes Genesis, insofar as the practical automobile is concerned, started with Gottlieb Daimler and Karl Benz. That was in 1886, when these two men each successfully harnessed the power of a lightweight internal combustion engine to a vehicle that would travel on land. Daimler and Benz worked just 60 miles apart, Daimler in the Stuttgart suburb of Bad Cannstatt, and Benz in Mannheim. Yet they never met, and their companies were not merged until the mid-1920s, a quarter-century after Daimler's death and long after Benz ceased to take an active role in his company. The stage for their accomplishments was set by others: the wheel was invented back in antiquity, steel was being manufactured in the middle of the 19th century, and crude oil in commercial quantities was discovered in 1857. A railroad spanned North America by 1869, and Nikolaus Otto, another German, invented the four-stroke internal combustion engine in 1873. The idea was obvious. But Daimler and Benz were the ones who made the concept of individual transport work. They built the first motorcycle, the first bus, the first truck and the first diesel powered truck; they built the first internal-combustion powered boat, and Daimler's engines were in the first successful air-craft that was controlled by anything other than the winds. Though unaware of it, they also laid the foundations for the Daimler-Benz AG, both in terms of the various directions they pursued and in the name they established for quality and performance. Even at the beginning, the reputations of Daimler and Benz spread quickly. As the 19th century was drawing to a close, many nations were in the middle of a shift from an agrarian to an industrial economy, the need for their ideas was urgent, and their inventions were sought by companies in other lands. Daimler, the more visionary of the two, was especially active in this field. Two of his French licensees, Panhand et Levassor and Peugeot, formed the basis for the French auto industry. Daimler's first license for North America was issued in 1888; eight years before Henry Ford built his Quadricycle. William Steinway, the American piano manufacturer, was in Germany and heard about Daimler's engines. He paid a visit, was treated to a ride, and liked what he saw. Daimler liked the idea of having an American licensee, and on October 6, they signed an agreement. Back home, Steinway concentrated on selling engines for streetcars and boats. Steinway died in 1896, and the automotive part of his firm was reorganized as the Daimler Manufacturing Company, which started production of delivery vans in 1901. By 1905, they were making luxury cars and did so for three years before deciding to concentrate on pianos. The only remaining "American" Mercedes, symbol of what might have been, now occupies a place of honor in the headquarters of Mercedes-Benz USA, the largest single subsidiary, in Montvale, N.J. Who was Mercedes? She was a 12-year old girl, Mercedes Jellinek by name, the daughter of Emil Jellinek, the Austro-Hungarian consul in Nice, France, at the turn of the century. The biggest automotive event of the year on the Cote d'Azur was Nice Speed Week. Jellinek, as the local enthusiast, entered a 23 hp Daimler racing car in the 1899 competition, and the car took first place. After an accident involving the Daimler entry in 1900, Jellinek went to Cannstatt and suggested several major changes for the 1901 model. The new car was lower, longer and lighter than anything they had done before, with a different radiator and a new engine. It was the forerunner of the modern automobile. Jellinek prevailed upon the Daimlers to name it after his daughter, the car went to Nice and won practically everything - and Daimler cars have been named Mercedes ever since. There was no three-pointed star on that first Mercedes, nor on the American Mercedes, for the simple reason that the star did not become the official trademark until 1909. Tradition has it that Gottlieb Daimler sketched the star in the 1870s both as a lucky star over his vehicles, and to symbolize powered vehicles on land, sea and in the air. But that is tradition; the trademark says 1909. Later, of course, it was combined with the Benz circle. Despite the fact that Daimler and Benz (and later on Daimler-Benz) made a variety of products, the cars were always the great standard bearers as far as the public was concerned. If it wasn't the first Mercedes, or the grand prix winners of 1908 or 1914, then it was the great "S" series of the late 1920s or the 500K and 540K speedsters of the 1930s, or the all-conquering racing cars of both the 1930s and the mid-1950s. And there was also the 300SL gullwing coupes, and the imposing 600 limousines in the '50s and '60s. Today the flag carrier is the 450 series, which ranges from a two seater sports car to a long wheelbase limousine. But that took place yesterday, or the day before. How it all started was something completely different: two practical engineers, a lucky star, and a 12 year-old girl in the south of France.