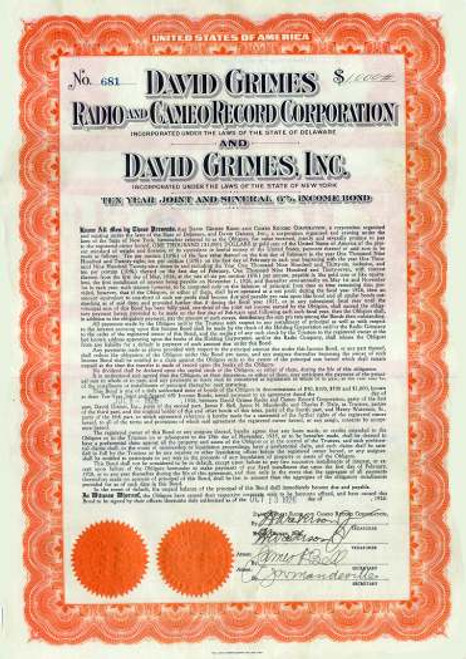 Beautifully engraved Certificate from the David Grimes Radio and Cameo Record Corporation issued in 1926. This historic document was printed by the John C. Powers Company and has an ornate border around it with the company's name on top. This item is hand signed by the company's officers including Henry Waterson as Treasurer, James F. Bell as Secretary and James N. Mandeville as Secretary and is over 82 years old. the company manufactured phonograph records and radio receiving sets from a plant located in Jersey City, New Jersey. The main office was located at 1571 Broadway in New York City. David Grimes was the founder of Grimes Radio Company and was famous for his inverse duplex method of reflexing. Grimes was a pioneer in radio receiver design and he produced a few sets of his own but most of them were sold to other notable companies. Henry Waterson was the founder of Little Wonders records which was founded in December 1914 when the company was started with the help of Victor Emerson. He was also a radio and sheet music producer. Cameo Record Corporation was a low cost label with very a few big name artists recording for it. Cameo merged with Pathe (Perfect) and Radio Corporation in 1928, forming ARC, soon to be one of the largest record distribution companies of the 1930's