Beautiful Paper Money Note from the Derby Fishing Company issued in 1808. This historic document has a vignette of a woman standing on a rock with an anchor in the middle of the sea. This item is hand signed by the Company's President ( Canfield Gillet ) and Secretary ( Sam Andrews ) and is over 201 years old. Historic with signs or wear. 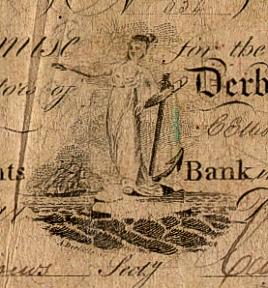 Certificate Vignette
"Derby Fishing Company" was in its most- prosperous condition. This company (famous in its day), was organized in Hull's tavern in Derby, January 15, 1 SO7. It carried on a very extensive fishing business on the Newfoundland Banks, taking the fish to Europe and the West Indies, and bringing home the products of those respective countries. Several of its vessels sailed regularly to Lisbon and ports in the Mediterranean, bringing home to New Haven cargoes of wine, oil, and salt. The company used the latter in preparing its fish. The capital subscribed at the first meeting was, according to the act of incorporation, fifty thousand dollars. It was soon increased, and made two hundred thousand, the increase being allotted in shares of twenty-five dollars each. Thc transactions of the company were, for that period, immense; and the duties which it paid during several years were equal to those paid by the three largest commercial houses of the port. So extensive was its business transactions, that at one time a chest of specie, which was brought to Derby, required eight men to take it from the wagon and place it in the vault of the Derby bank. The bank building was the brick edifice still standing at Derby Narrows. The newspapers of that day often spoke in high praise of the fine vessels owned by the company. Among these vessels were the " Victor," " Naugatuck" (which disappeared at sea), "Charles," " Housatonie," "Lark," "Sally," "Patriot," "Derby," and " Keziah." This latter ship, in 1S10, brought sixty Irish emigrants to New Haven direct from Belfast. The stock of the company was owned in New Haven and Derby ; and at its inception several of the most eminent merchants of our town were directors. After a few years of prosperity, the tide ebbed. Disasters overtook the company; several of its ships were lost at sea; others were captured and sold by the British and French admiralty orders; men to whom goods had been sold could not pay for them; and finally, in the summer of 1815, the company failed and made a disastrous ending. The Derby Fishing Company was incorporated in 1807 to engage in fisheries ; two years later It was grantd the privilege of writing marine Insurance. On account of the Interruption of its industries by the Embargo act, it was allowed to loan its capital. The directors of the company, considering this sufficient authorization, began the business of banking, Issuing notes of circulation. This was considered by the General Assembly an abuse of privileges granted, and the company was summoned to appear before them. The following year a charter was granted for the establishment of a bank at Derby, but with the provisoes that the fishing company should hold no stock, nor should any one of Its ofl^icials act as a director of the financial Institution. The bank was required to furnish an annual statement to the General As- sembly; this was the first time in the history of the State that such a demand had been made. These restrictions, however, were repealed two years later. History of the old town of Derby, Connecticut

Greek Bond (Reparations to Turkey from Greco-Turkish War 1898) with Aphrodite, Apollo, Athena and Hypocrites (guaranteed by France, Great Britain and Russia ) from the Kingdom of Greece - 1898