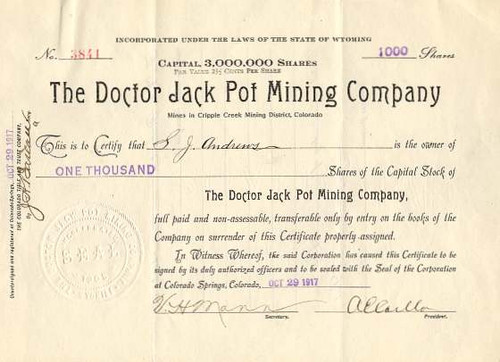 Beautifully engraved certificate from the Doctor Jack Pot Mining Company issued in 1917. This item is hand signed by the Company's President( Albert E. Carlton ) and Secretary and is over 87 years old. The Doctor Mine and the Jack Pot Mine sued each other over the same claims. Eventually, the two companies merged together to form the Doctpor Jack Pot Mine. The new company owned a total of 53 acres on Gold and Raven Hills, just above the town of Anaconda. A. E. Carlton and his brother, Leslie, moved to Colorado from Illinois in 1889. They settled in Cripple Creek and established the Colorado Trading and Transfer Company, a drayage company hauling freight from railroad stations into Cripple Creek. They became the principal coal dealers in the Cripple Creek District. Later they were noted for reviving failing business endeavors, including several tunnels. A. E. Carlton was the banker controlling the First National Bank of Cripple Creek, the First National Bank of Canon City and the City Bank of Victor and was president of the Cripple Creek Central Railway Company. The consolidated property produced approximately 3,500,000 troy gold ounces. It, along with so many other top producing Cripple Creek mines, came under the control of Albert E. Carlton (founder of the Holly Sugar Corporation). The Jack Pot mine was located on Raven Hill. The mine was later bought by Albert E. Carlton who helped finance the El Paso Tunnel which would drain the mine. In 1915 the company shipped 14,719 tons of gold ore, averaging $19.98 per ton.