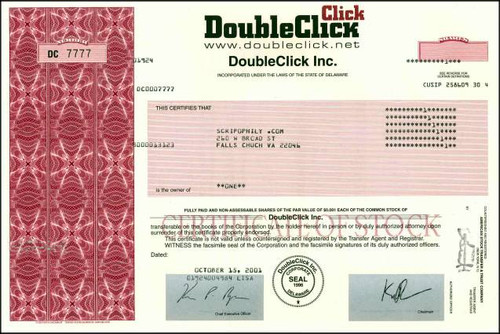 Beautifully engraved Certificate from the Doubleclick issued in 2001. This historic document was printed by the United States Banknote Company and has an ornate border around it with a vignette of the company's name. This item has the printed signatures of the company's officers.

Certificate Vignette
DoubleClick is a provider of internet ad serving software. Its clients include agencies, marketers (Universal McCann Interactive, AKQA etc.) and publishers who service customers such as Microsoft, General Motors, Coca-Cola, Motorola, L'Oreal, Palm, Visa USA, Nike, Carlsberg and many more. Formerly listed as DCLK on the NASDAQ, and purchased by private equity firm Hellman and Friedman in July 2005, DoubleClick was founded in 1996, and is well established in internet marketing. Unlike many other dot-com companies, they survived the busting of the dot-com bubble. Doubleclick's headquarters are located in New York. On 13 April 2007, Google announced it would be acquiring DoubleClick for $3.18Bn in cash.[1] DoubleClick was founded in 1995 as Internet Advertising Network by Kevin O'Connor and Dwight Merriman. DoubleClick was initially engaged in the online media business, meaning it helped web sites sell advertising to marketers. In 1997 the company began offering the online ad serving and management technology they had developed to other publishers as the DART services. During the internet downturn, DoubleClick divested its media business, and today DoubleClick is purely involved in ad management from the technology end -- uploading ads and reporting on their performance. In 1999 a $1.7 billion merger with data-collection agency Abacus Direct, a company that works with offline catalog companies, raised fears that the combined company would link anonymous Web-surfing profiles with personally identifiable information (name, address, telephone number, e-mail, address etc.) collected by Abacus. This merger made waves and was heavily criticized by privacy organizations. The controversy increased when it was discovered that sensitive financial information users entered on a popular Web site that offered financial software was being sent to DoubleClick, which delivered the ads. Much of the controversy around privacy at this time was generated by statements made by Jason Catlett of Junkbusters, claiming that DoubleClick was or intended to do things that the company had never mentioned or included in any planned or announced service. As a result of the the negative press, the company dropped any integration of their services with those of Abacus, and instigated stronger privacy policies and oversight. In April 2005, Hellman & Friedman, a San Francisco-based private equity firm announced its intent to acquire the company and operate it as two separate divisions with two separate CEOs for TechSolutions and Data Marketing. The deal was closed in July 2005. Hellman & Friedman announced in December of 2006 the sale of Abacus to Epsilon Interactive. In April 2007 DoubleClick was bought by Google with 3.1 billion dollars. Eric Schmidt, the general manager of Google, says that these two technologies combined will give a chance to control searching and displaying advertisements in the internet. DoubleClick is often linked with the controversy over spyware because browser cookies are set to track users as they travel from website to website and record what commercial advertisements they view and select while browsing. In order to create profiles non-personally identifiable information such as IP address, domain, browser, operation system, local time and date, page viewed are collected. Doubleclick's tools could be used in ways that would mean that it holds personally identifiable information. The company explains that "the personal information collected is used only for the purpose for which it is requested". The information stored on DoubleClick servers belongs to DoubleClick's clients. According to DoubleClick, it generally uses the data only as a "statistical or aggregate information" source. The clients themselves promise contractually not to use information that "DoubleClick could recognize as either sensitive or personally identifiable" to target ads source". DoubleClick offers technology products and services which are sold primarily to advertising agencies and media companies to allow clients to traffic, target, deliver, and report on their interactive advertising campaigns. The company's main product line is known as DART. History from Wikipedia and OldCompanyResearch.com.