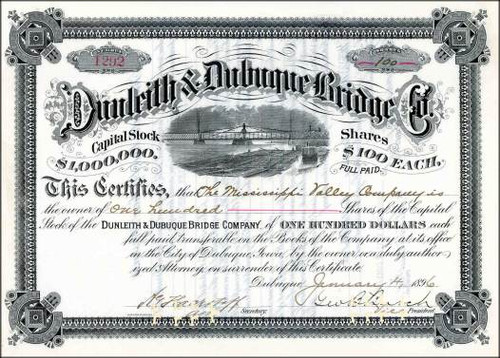 Beautifully engraved certificate from the Dunleith & Dubuque Bridge Company issued in the 1890's. This historic document has an ornate border around it with a vignette of Dunleith & Dubuque Bridge with rafts in foreground. This item is hand signed by the Company's President and Secretary and is over 103 years old. The certificate was issued to The Mississippi Valley Company and endorsed on its verso by the Company's President, Stuyvesant Fish.

Certificate Vignette
Stuyvesant Fish, 18511923, American railroad executive, b. New York City; son of Hamilton Fish (180893). He became (1877) a director of the Illinois Central RR, and as its president (18871907) he built the railroad into a large system. Fish was ousted from the presidency by E. H. Harriman after Fish's participation in the state committee that investigated (1906) the Mutual Life Insurance Company of New York.