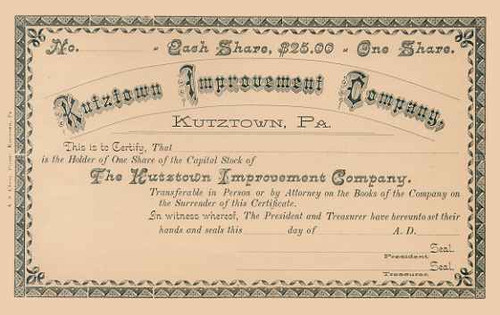 Beautifully engraved unissued certificate from the Kutztown Improvement Company printed in the 1890's. This historic document has an ornate border around. This item is hand signed by the company's president and treasurer and is over 105 years old. Kutztown, PA Before the European settlers came to America, the area that would become Pennsylvania was inhabited by about 15,000 Indians, mostly of the Algonquin tribe. It was the Lenni Lenape Clan of that tribe that eventually sold the area now known as Berks County to William Penn. In 1662, William Penn began settling his new colony. He promised a government of benevolence and challenged newcomers to establish original economic and social forms and enjoy religious freedom. Back in Europe, the Thirty Years War resulted in the placement of severe restrictions upon the small German religious sects form during the Reformation Period of the 1500's including the Mennonites, Amish, Dunkards and more. These restrictions and other disturbances caused the Germans to accept William Penn's invitation to join him in the New World. Sweden and English also flocked to Pennsylvania, but most settled in other areas. Berks County, named for Berkshire in England, was made up of sections of Lancaster, Chester and Philadelphia counties. On June 17, 1775, a 130-acre tract of land along the Saucony was purchased by a man named George Kutz. He named the land Kutztown after himself and laid out a 215 lot plan for his hamlet. Adam Dietrich and Henry Schweier were the first to purchase lots. Kutztown grew and became more and more populated, and by Special Act of Assembly on March 1, 1815, became the second borough in Berks County. Northeast Berks County, sometimes known as the East Penn Valley, is composed of 5 boroughs: Fleetwood, Kutztown, Lenhartsville, Lyons and Topton; and 8 Townships: Albany, District, Greenwich, Longswamp, Maidencreek, Maxatawny, Richmond and Rockland.