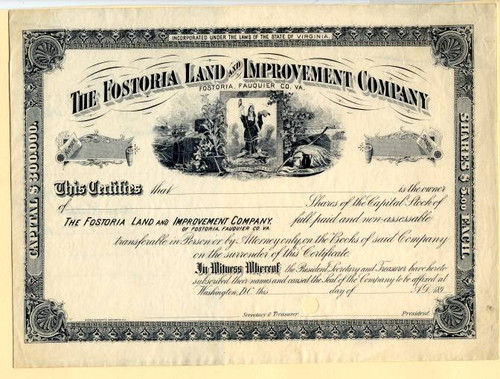 Beautiful RARE specimen certificate from the Fostoria Land & Improvement Company printed in the 1890's. This historic document was printed by Gendney & Roberts, Washington D.C. and has an ornate border around it with a vignette of the Virginia State Seal.

Certificate Vignette
Westover is a neighborhood in Arlington, Virginia on the National Register of Historic Places centered around Washington Boulevard between North McKinley Road and North Longfellow Street. A true model of mid-century Urbanism, Westover remains a pedestrian friendly neighborhood which sees its residents walk to shops, work, and public transportation. The neighborhood is between the Ballston Station and the East Falls Church Stations, both part of the Washington DC Metro and is serviced by many Metro Buses. During the nineteenth and early twentieth centuries, the area that was to become Westover was agricultural in nature, not unlike much of Northern Arlington County at the time. In the mid-nineteenth century, the property was owned by Nicholas Febrey, a civic leader in Arlington and one of the largest landholders in the area. In the 1890s, small communities began to develop along newly-established electric railways which serviced the area, as real estate developers began subdividing the land. One such community was Fostoria, developed by the Fostoria Land and Development Company in 1890, which took advantage of the Washington, Arlington, and Falls Church Electric Railway. The railroad provided passenger service from Rosslyn to East Falls Church and ran along Four Mile Run. By 1907, the neighborhood was known as Highland Park - the earliest houses constructed in the Westover area are located within this community. A measure of the development in the area at the time, the Walter Reed Elementary School was constructed in 1938 on McKinley Road, originally a section of Febrey farmland. Though Westover had seen significant development over the previous half century, in 1938, when the school was constructed, the area was still largely undeveloped. By that time, most of Westover was owned primarily by Ashton C. Jones and his wife, Margaret Rucker. Jones deeded the land to the local development company, Mace Properties, Inc., which was owned by Miles A. Mace. In turn, Mace Properties developed the majority of the buildings located in the Westover Historic District between 1939 and 1948. History from Wikipedia and OldCompany.com (old stock certificate research service). Specimen Certificates are actual certificates that have never been issued. They were usually kept by the printers in their permanent archives as their only example of a particular certificate. Sometimes you will see a hand stamp on the certificate that says "Do not remove from file". Specimens were also used to show prospective clients different types of certificate designs that were available. Specimen certificates are usually much scarcer than issued certificates. In fact, many times they are the only way to get a certificate for a particular company because the issued certificates were redeemed and destroyed. In a few instances, Specimen certificates were made for a company but were never used because a different design was chosen by the company. These certificates are normally stamped "Specimen" or they have small holes spelling the word specimen. Most of the time they don't have a serial number, or they have a serial number of 00000. This is an exciting sector of the hobby that has grown in popularity over the past several years.