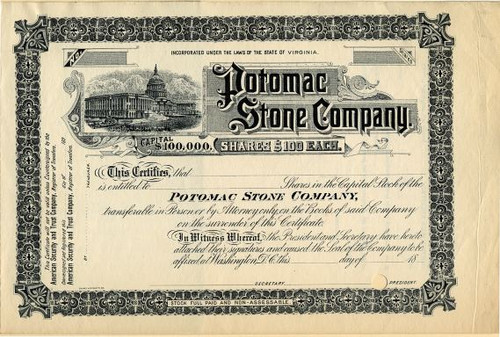 Beautiful engraved specimen certificate from the Potomac Stone Company dated in the 1890's. This historic document was printed by Gedney & Roberts Company and has an ornate border around it with a vignette of the capital building. This item is over 110 years old. 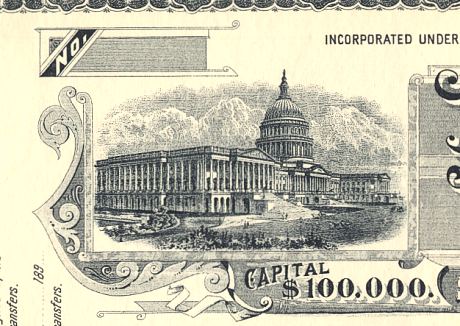 Certificate Vignette
From a published reports in the 1890's: CHARLES G. SMITH & SON, who are the proprietors of the Potomac Stone Company's Quarries, the office and crusher being located at 3220 Water Street, was established in 1890, the members of the firm being Messrs. Charles G. Smith and Charles G. Smith, Jr. They are natives of New York State and have resided in Washington a number of }-ears. They are notable members of the Builders' Exchange. Their works are among the largest in the country, the quarries extending 2^ miles on the Potomac River, between the Aqueduct and Chain Bridges. Steam power is used, and the works are thoroughly equipped in every particular, while a force of skilled hands is employed. The company supply Potomac bluestone for dimensions, foundations, superstructures, etc., and contract to furnish contractors with crushed stone for street concrete, etc. The Messrs. Smith have been instrumental in putting some of the best building material upon the market, many of the leading structures being supplied with material from their quarries. They have everv- facility for receiving stone by water, and shipping the same, their trade extending throughout the District and the State of Virginia. They are regarded among the most prompt and reliable men in their line, and their contracts are invariably carried out with promptness and in strict conformity with the letter of their agreements. About Specimens Specimen Certificates are actual certificates that have never been issued. They were usually kept by the printers in their permanent archives as their only example of a particular certificate. Sometimes you will see a hand stamp on the certificate that says "Do not remove from file". Specimens were also used to show prospective clients different types of certificate designs that were available. Specimen certificates are usually much scarcer than issued certificates. In fact, many times they are the only way to get a certificate for a particular company because the issued certificates were redeemed and destroyed. In a few instances, Specimen certificates we made for a company but were never used because a different design was chosen by the company. These certificates are normally stamped "Specimen" or they have small holes spelling the word specimen. Most of the time they don't have a serial number, or they have a serial number of 00000. This is an exciting sector of the hobby that grown in popularity over the past several years.