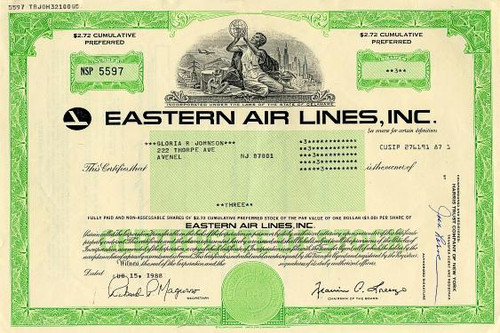 Beautiful certificate from the Eastern Air Lines, Inc no later than 1989. This historic document was printed by United States Banknote Company and has an ornate border around it with a vignette of an allegorical woman holding a globe. This item has the signatures of the Company's President and Secretary and is over 33 years old. Folds. 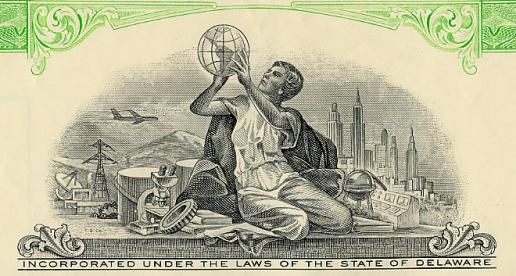 Eastern Airlines has a history that dates back to 1927. At that time, Pitcairn Aviation Inc. a mail carrier had been created to provide mail services to the United States Postal Service. In 1930, the company was sold and then renamed to Eastern Air Transport. was one of several carriers that developed and flourished as a result of the Air Mail Act of 1934. The Air Mail Act of 1934 was major piece of legislation created by Congress in 1934 that would effect the aviation industry. In essence, this Act authorized the awarding of government mail contracts to private carries, established the rates for transporting mail and it set the airmail rates. Contracts were awarded through the United States Postal Service, and contracts were awarded through a bidding process. This act as well required air carriers to separate them selves from manufactures of aircraft. As many air carriers were owned at that time by aircraft manufactures. This Act inspired owners of aircraft and investors to start up air carrier services, providing airmail service. Eastern Air Transport was one of several carriers that grew out of the Air Mail Act of 1934. However, Eastern Air Transport had participated in the "Spoils Conference" with Walter Brown, General Postmaster. As a result, Eastern Air Transport was not allowed to participate in the biding of airmail contracts. To get around the law, Eastern Air Transport then changed its name to Eastern Airlines. The awarding of airmail contracts by the postal service was at that time very lucrative for the airmail carriers. These carriers would do whatever they had to do in order to obtain a contract. For example the Houston Corpus Christi Brownsville Air Mail Route was placed up for bid. Braniff Airlines bid on this route for 1/10th of one cent per mile, while Eastern Airlines had bid to fly this route zero cents per mile. As a result, Eastern was awarded the contract. The Air Mail Act of 1934, forced Eastern Airlines to separated from it parent company, North American Aviation. As this act did not allow airline carriers to be owned by aircraft manufactures. Captain Eddie Rickenbacker, an automobile racer entered into World War I. He became a volunteer fighter pilot. Rickenbacker was responsible for shooting down several aircraft and balloons during the war. After the war, Rickenbacker became president of Eastern Airlines in 1938, after several unsuccessful attempts to operate an automobile company. In 1954, Rickenbacker, became chairman of the board at Eastern Air Lines until 1963. During the 1970' and 1980's it was a very difficult time for the airlines. With the passing of the Airline Deregulation Act of 1978 airline carries were provided with new freedoms to expand their route systems and the flexibility to develop innovative pricing structures. This flexibility allowed the carrier to further grow into new markets. However, deregulation brought about airfare wars. Airlines were competing to remain competitive in the market, waged airfare wars against their rivals. Many air carriers were having great difficulty in keeping their doors open. Eastern Airlines was not exempt from having to contend with price wars as well as being a participant. This placed many air carriers in an vulnerable state to unwanted hostile takeovers and mergers. Eastern fighting to keep its doors open, sold majority share holdings to Frank Lorenzo, owner of Texas Airlines. Lorenzo, filed for restructuring of Eastern Airlines under the bankruptcy laws. Lorenzo in his desire to have greater control over the airline industry brought in non union workers and created a new air fare war that many airlines could not compete against a non union airline. Eastern further offered upscale service such as its first class seats to coach prices This further eroded the airline industry, carrier after carrier had filed for bankruptcy. Lorenzo, was now placed into a position that he could pick and choose which airline he would take over. Lorenzo on a hunt, took over several airlines such People Express, Continental, New York Air, etc. Frank Lorenzo was not satisfied. Driven by profits, Lorenzo requested machinists of Eastern Airlines to take a pay cut. However, the machinist union refused to do so. This brought about a war between labor and management. The machinist union IAM (International Association of Machinist and Aerospace Workers) called for a strike. The strike brought about air passenger delay and the company began loosing millions in daily revenues. The United States Bankruptcy Court intervened after a creditor brought suit against Eastern Airlines. The court very much aware of Lorenzo's labor practice, appointed Martin Shugrue as temporary trustee over Eastern. Eastern was unable to overcome its fiscal downfall and as a result was forced to close its door. Many had accused Lorenzo of selling off assets and transferring Eastern's aircraft to Texas Air. Other accusations included depleting Eastern's pension fund. Many felt Lorenzo was only interested in purchasing defunct air carriers in order to strip the carriers of its assets. This was a major blow to Lorenzo's credibility in the business community. History from Wikipeida and OldCompanyResearch.com.