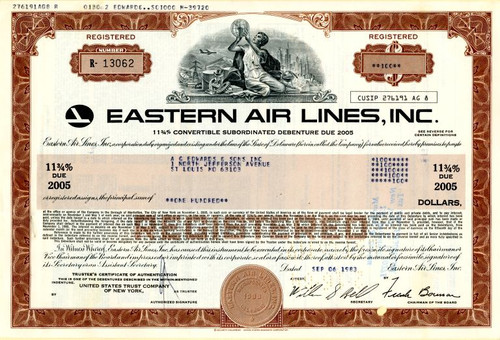 Beautifully engraved 11 3/4% convertible subordinated debenture certificate from the Eastern Air Lines, Inc. issued prior to 1986. This historic document was printed by the Security-Columbian United States Banknote Company and has an ornate border around it with a vignette of an allegorical woman with a plane and city skyline in the background. This item has the printed signatures of the Company's President ( Frank Borman ) and Secretary and is over 28 years old. 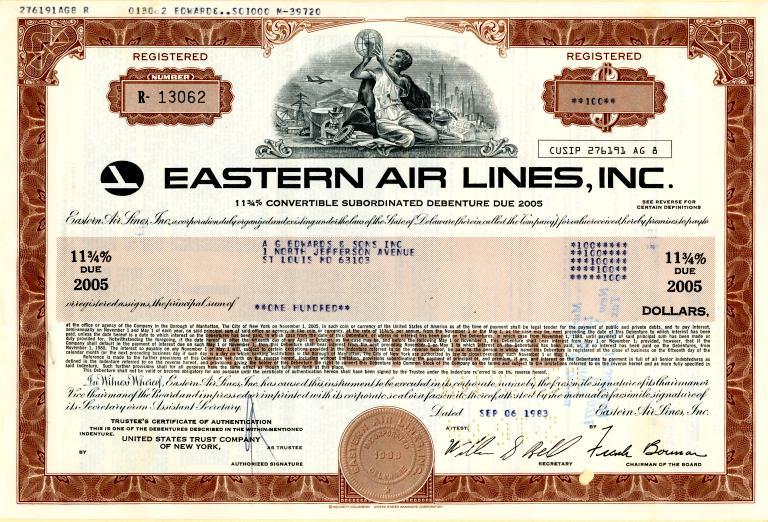 Certificate
Frank Borman NASA Astronaut A hero of the American Space Odyssey, Frank Borman led the first team of American astronauts to circle the moon, extending man's horizons into space. He is internationally known as Commander of the 1968 Apollo 8 Mission. A romance with airplanes that began when he was 15 years old, took Frank Borman to the Air Force and then to NASA. A career Air Force officer from 1950, his assignments included service as a fighter pilot, an operational pilot and instructor, an experimental test pilot and an assistant professor of Thermodynamics and Fluid Mechanics at West Point. When selected by NASA, Frank Borman was instructor at the Aerospace Research Pilot School at Edwards AFB, California. In 1967 he served as a member of the Apollo 204 Fire Investigation Board, investigating the causes of the fire which killed three astronauts aboard an Apollo spacecraft, reminiscent of the Challenger tragedy. Later he became the Apollo Program Resident Manager, heading the team that re-engineered the Apollo spacecraft. He also served as Field Director of NASA's Space Station Task Force. Frank Borman retired from the air Force in 1970, but is well remembered as a part of this nation's history, a pioneer in the exploration of space and a veteran of both the Gemini 7, 1965 Space Orbital Rendezvous with Gemini 6 and the first manned lunar orbital mission, Apollo 8, in 1968. Borman's retirement from the Air Force in 1970 did not end his aviation career. He became a special advisor to Eastern Airlines in early 1969 and in December 1970 was named Sr. Vice President-Operations Group. He was promoted to Executive Vice President-Genera Operations Manager and was elected to Eastern's Board of Directors in July 1974. In May 1975 he was elected President and Chief Operating Officer. He was named Chief Executive Officer in December 1975 and became Chairman of the Board in December 1976. During his tenure as Chief Executive Officer of Eastern, the airline industry went through an enormous change caused by deregulation. During this period Eastern originated several unique programs including profit sharing and wages tied to company profitability. These programs produced the four most profitable years in the company's history. A recalcitrant union forced their abandonment in 1983 and the resulting loses led to the sale of the airline to Texas Air Corporation. Colonel Borman retired from Eastern Airlines in June of 1986. Colonel Borman was privileged to serve as Special Presidential Ambassador on trips throughout the Far East and Europe, including a worldwide tour to seek support for the release of American Prisoners of war held by North Vietnam. He received the Congressional Space Medal of Honor from the President of the United States. Colonel Borman also was awarded the Harmon International Aviation Trophy, the Robert J. Collier Trophy, the Tony Jannus Award and the National Geographic Society's Hubbard Medal--in addition to many honorary degrees, special honors and service decorations. More recently, in September of 1990, Colonel Borman along with fellow Apollo 8 astronauts, Lovell and Anders, was inducted into the International Aerospace Hall of Fame. And in October of 1990 received the Airport Operators Council International Downes Award. In March 1993, he was inducted into the U.S. Astronaut Hall of Fame. Frank Borman was born in Gary, Indiana, and was raised in Tucson, Arizona. He earned a Bachelor of Science degree from the U.S. Military Academy, West Point, in 1950 and a Master of Science degree in Aeronautical Engineering from the California Institute of Technology in 1957. He completed the Harvard Business School's Advanced Management Program in 1970. Bio from NASA.